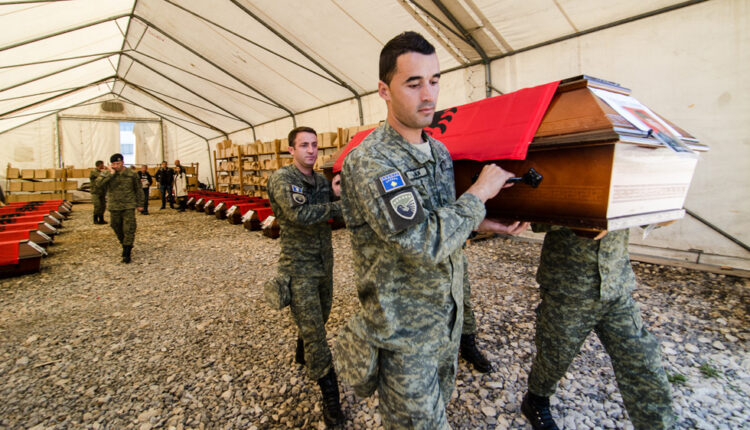 Pristina, Kosovo – For 16 years in a small village in In the central region of Kosovo, the relatives of missing war victims visited empty graves.

Some had photos, some didn’t. But at least it was a place where they could bring flowers, talk to the picture, and mourn the loss of a loved one whose body had not been found.

Morina’s brother, uncle and cousins ​​were killed in the early morning hours of April 17, 1999 in the village of Cikatova e Vjeter, allegedly by Serbian security forces, during the 1998-1999 war in Kosovo.

“We knew they were dead. But we wanted to know where the bodies are, ”said Morina from a tent in the capital Pristina.

The armed forces of the ethnic Serb President Slobodan Milosevic took action against separatist ethnic Albanian rebels and their civilian supporters in the late 1990s. Around 13,000 people were killed in the conflict in Kosovo, most of them ethnic Albanians.

When the war ended after 78 days of NATO air strikes that displaced Milosevic’s military, police and paramilitary forces, an estimated 4,500 people were missing.

Another relative, 48-year-old Zylfije Morina, also lost her husband when he was killed in the same village. His body also disappeared.

“It was very difficult. It was even more difficult when we visited their empty graves,” she said.

The Morina family has waited since that fateful day to receive news that the remains of missing relatives were found and a DNA or blood sample match was conducted.

Last fall, they finally got the news and began making preparations for a proper burial.

They chose April 17, 2015, the 16th anniversary of the massacre in Cikatova e Vjeter, as the day for the ceremony.

Habib Morina and his 29-year-old son Behar traveled from the US state of California to Kosovo, where they have been living as refugees since June 1999. They had come to join other relatives and finally bury the remains of 19 war victims – the Morina family, who were found in a mass grave in Serbia last year.

Prenkë Gjetaj, head of the Kosovar government’s commission on missing persons, said that to date 900 bodies have been found in mass graves in Serbia and transported to Kosovo. His office is responsible for coordinating with local and international partners in the search for missing war victims.

Gjetaj said the remains of 54 war victims, including those from the Morina family, were found in a mass grave in Rudnica, Serbia, last year.

“Everything was done to hide the truth and the traces of the crime,” said Gjetaj, describing how the army moved bodies of war victims from Kosovo to unknown locations in Serbia, where many were still hidden.

According to the commission, 1,650 people were still missing during the war.

More than 10,000 people were killed and Gjetaj admitted that the process of finding the missing people is long and difficult, but he said, “We have to do it.” 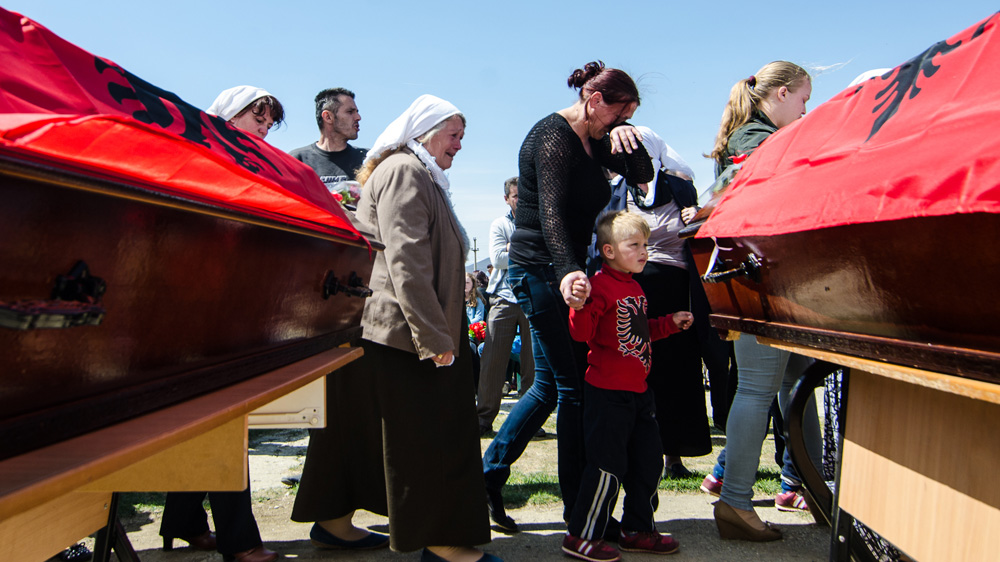 Blood samples from war victims in Kosovo were analyzed with the help of the International Commission on Missing Persons (ICMP), which was set up in 1996 to solve the fate of those missing in the conflicts in the former Republic of Yugoslavia.

In order to show the country that the missing war victims will not be forgotten, the government started the country’s first “Missing Persons Week” this year to commemorate the massacre of April 27, 1999 in Meja, the worst of the massacre Conflict.

Recently, a memorial for the missing 1,650 was unveiled in the garden of the Kosovar parliament.

“To mark that date, we had activities for a week visiting family members, the places where the crimes took place, monuments, as a token of honor, as a token to show people that we are still involved and working on it to shed light on the fate of their loved ones, “said Gjetaj. 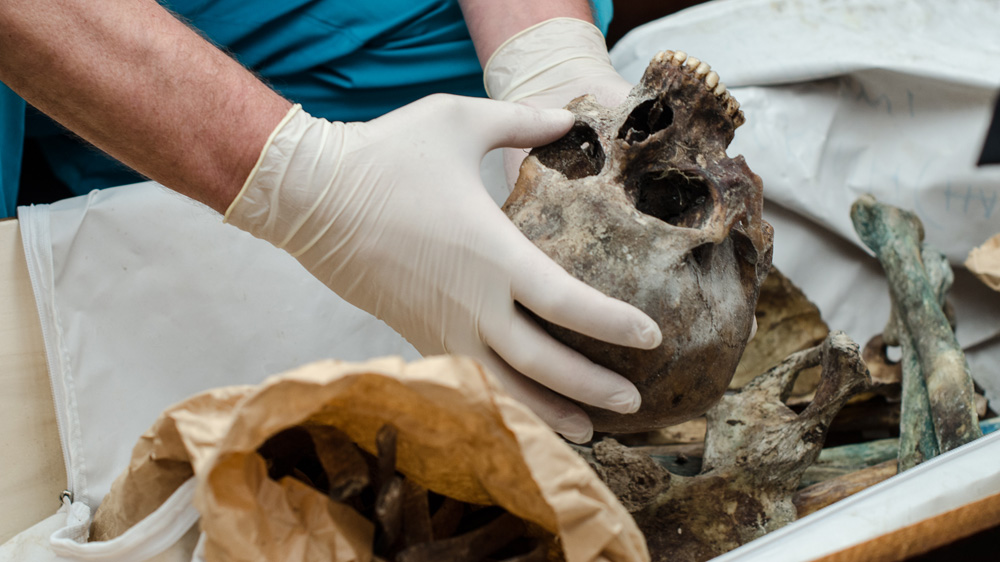 Driton Morina, 34, remembers the sweater his father wore before he was killed. The sweater, along with other ragged clothing found with his father’s remains, was stiff with dirt and dried mud.

Morina refused to bury the clothes with his father’s remains because he wanted to keep them as evidence for future generations that the crime had happened. He hopes that one day they will be shown in a museum in Kosovo.

The day before the funeral, close relatives of the Morina family came to the main hospital in Pristina to sign the documents that they had officially collected the remains, which were laid out in coffins and draped with the Albanian flag.

Some family members insisted on seeing the bones and clothing in the grave.

“Usually… we prefer families not to open up [the caskets]and remember them as they were, ”said Arsim Gerxaliu, head of the forensic medicine department in the Ministry of Justice.

“But some families insist on seeing the remains – the bones – and we cannot stop them because they have the right to examine the bones,” said Gerxaliu.

Forty-seven members of Gerxalius’ family were killed in the war and he said it was his responsibility to return the remains of other war victims to their families.

He said he had made 97 trips to Serbia since 1999 to search and exhume mass graves and is planning another trip this month.

“That number of 1,650 is still a problem until we find them all. That problem will continue,” said Kushtrim Gata of the Missing Persons Commission.

For Shqipron Morina, who was five years old when his father was killed in the Cikatova e Vjeter massacre, and for his family, the return of the remains from the mass grave brought relief.

“Now we have the real place, we have the bodies in the grave,” he said after burying his father. 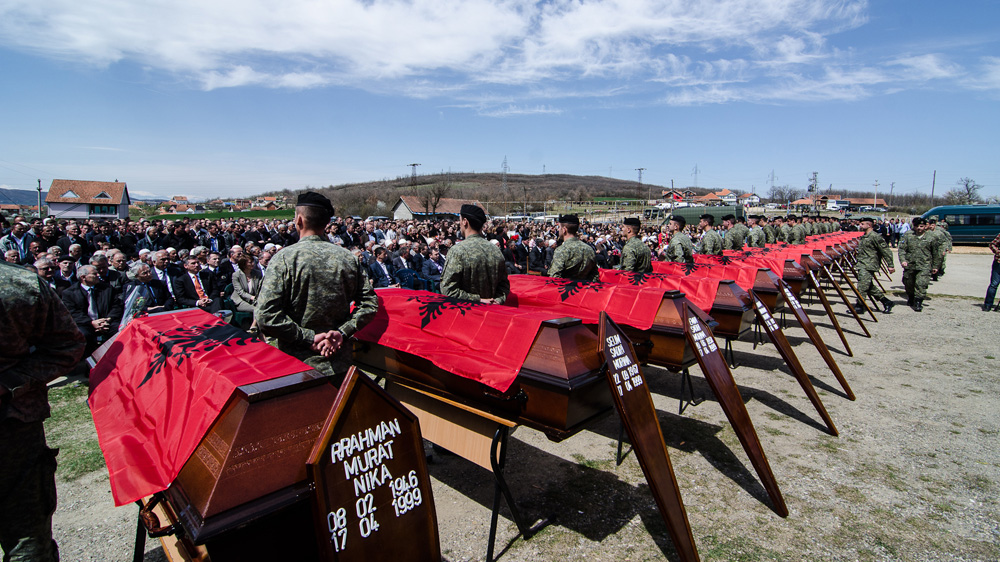 The coffins of the 21 Kosovar Albanians killed on April 17, 1999 are exhibited at the funeral ceremony in the village of Cikatova e Vjeter [Valerie Plesch/Al Jazeera]

Marko was a police officer for 13 years, after which he stated “ENOUGH” AND NOW HE IS DOING A COMPLETELY DIFFERENT JOB