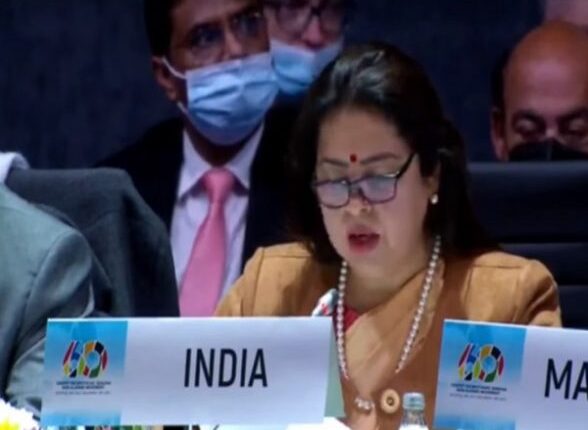 MoS Lekhi led the Indian delegation as the Prime Minister’s special envoy at the high-level commemoration to mark the 60th anniversary of the Non-Aligned Movement, which took place in Belgrade from October 11th to 12th.

Also read | India is delivering 10 Crore COVID-19 vaccines each to Nepal, Bangladesh, Myanmar and Iran as part of the “Vaccine Maitri” program.

“The visit gave further impetus to the close and friendly relations between India and Serbia. Both sides agreed to expand and diversify the partnership between the two countries,” MEA said in a statement.

In their speech at the plenary session of the conference, the MoS urged NAM members to ensure the continued relevance and impact of the NAM on global outcomes. She underlined the need for NAM to focus on key current issues such as climate change, terrorism and the fight against the Covid19 pandemic.

The MoS highlighted India’s contribution by delivering more than 70 million doses of vaccine to 93 countries as an expression of its continued commitment to meet the needs of the global south.

On the sidelines of the high-level NAM meeting, the minister also held a bilateral meeting with General Jeje Odongo, Uganda’s foreign minister, and, according to the ministry, discussed ways to further strengthen and revitalize the NAM under the upcoming Uganda Presidency from 2023 Declaration for Foreigners Affairs (MEA).

The First Lady of Serbia Tamara Vucic took part in a yoga master class at MoS together with Serbian yoga teachers and practitioners.

The MoS was aimed at the teachers and students of the Law Faculty of the University of Belgrade. She also had an interaction with a select group of Indologists and Indophiles at a luncheon meeting.

She attended Matica Srpska, a historical cultural institution, where she was gifted with Serbian translations of ancient Indian texts. The MoS paid their respects to the monuments erected in honor of Mahatma Gandhi and Gurudev Rabindranath Tagore. (ANI)

(This is an unedited and auto-generated story from the Syndicated News Feed. LatestLY Staff may not have changed or edited the content.)

A customer from Japan in entrance of the monastery Visoki Decani confirmed HOW WORLD HERITAGE IS CARED FOR! Video

HOW WILL THEY TRAVEL THIS WINTER? The dilemma is solved! It’s recognized whether or not the vaccine is obligatory for getting into the EU!