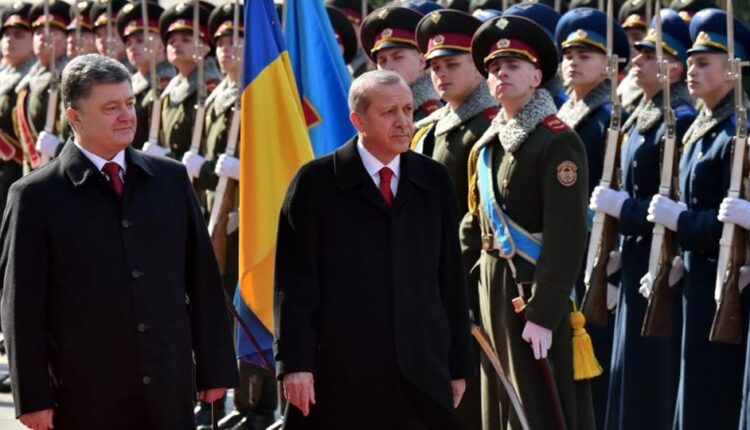 Erdogan’s visit focuses on bilateral relations and the ethnic Turkish minority of the Crimean Peninsula. Turkey does not recognize the annexation of Crimea by Russia.

Ukrainian President Petro Poroshenko (L) and Turkish President Recep Tayyip Erdogan check the honor guard during a ceremony prior to their meeting in Kiev, Ukraine on March 20, 2015.[AFP]
(AFP)

The two heads of state and government will exchange views on bilateral relations and regional issues in the capital, Kiev, where a number of agreements are also expected to be signed.

The Tatars of the peninsula

During his visit, Erdogan will also receive representatives of Turkish communities with whom he will discuss the Crimean question.

Ukraine has been ravaged by conflict since March 2014 after Russia annexed Crimea after an independence vote that Kiev and much of the international community, including the United Nations, consider illegal.

Turkey, the US and the EU are among those who do not recognize Crimea as Russian territory.

The peninsula has a Tatar minority who have suffered in the struggle for political control.

Irrespective of this, according to the United Nations, more than 10,000 people have been killed in fighting in eastern Ukraine between government troops and Russian-backed separatists since April 2014.

At his invitation, Erdogan will travel from Ukraine to Serbia for an official meeting with President Aleksandar Vucic, the Turkish President’s press office announced on Saturday.

During the visit, Erdogan will also meet with the National Assembly of Serbia.

The two presidents are expected to take part in an economic forum between Turkey and Serbia, where they will discuss bilateral issues and sign agreements.

“Turkey hopes this visit will be an important step towards further strengthening bilateral relations in a way that will benefit the entire region,” Erdogan’s press office said.

Oscars – a two-year quick is over, who will take the golden statuettes