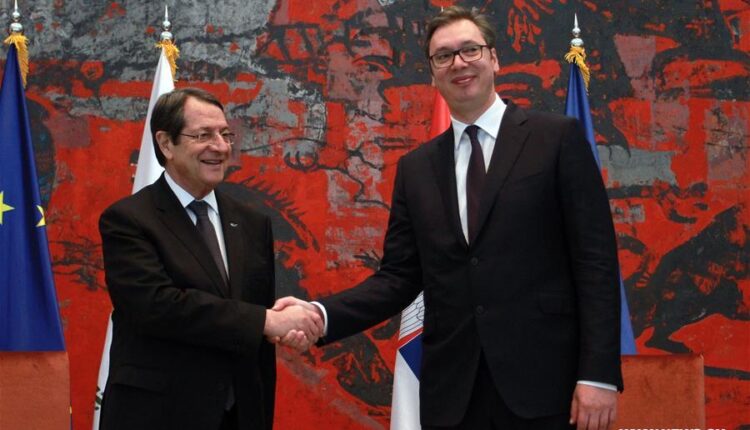 Serbian President Aleksandar Vucic (R) shakes hands with his Cypriot counterpart Nicos Anastasiades at his meeting on May 10, 2018 in Belgrade, Serbia. Anastasiades arrived in Belgrade on a state visit. (Xinhua / Predrag Milosavljevic)

BELGRADE, May 10 (Xinhua). The presidents of Serbia and Cyprus, who met here on Thursday, agreed to step up cooperation and joint projects to deepen their countries’ relations.

Cypriot President Nicos Anastasiades, who arrived in Belgrade on Wednesday evening, met his Serbian counterpart Aleksandar Vucic in the Palace of Serbia.

The two heads of state and government discussed the situation in the region and in Cyprus, the European integration process in Serbia and future cooperation.

At a press conference after the meeting, Vucic praised Cyprus as one of the strongest protectors of international law among the member states of the European Union (EU) and thanked his counterpart for the support of the Serbian southern province of Kosovo and Metohija, which unilaterally declared independence in 2008.

Anastasiades stressed that Cyprus does not recognize Kosovo’s unilateral declaration of independence and regards it as an illegal act, as it contradicts UN Security Council resolution 1244.

According to Vucic, the cooperation between the two countries will include tourism and infrastructure projects in Serbia in which companies from Cyprus have expressed an interest in participating.