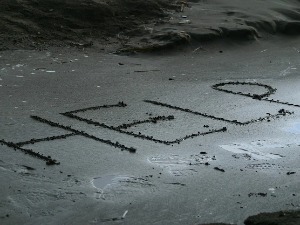 For a man from New Zealand, surfing turned into a dramatic survival story, while he was fighting the waves on a secluded beach in West Auckland.

During the windsurfing, a big wave hit him and threw him on the rocks, a spokeswoman for the company “Surf Life Saves” told the local media.

Unable to move away from the beach, however, the surfer managed to write the big word “Help” in the sand before it crashed.

Fortunately for him, a desperate call for help was seen by mountaineers from a nearby lookout.

They informed the authorities about the accident and took a photo of a man lying motionless next to the message about the sand.

The injured man was very lucky, considering the distance of the location where the accident happened and the isolation of the beach, rescuers told local media.

“The message in the sand is not visible from the footpaths at the northern end of Mercer Bay, so it was a great fortune that the person who informed the authorities and her friend were at the southern end and could see it,” said search and rescue supervisor John -Michael Svanik.