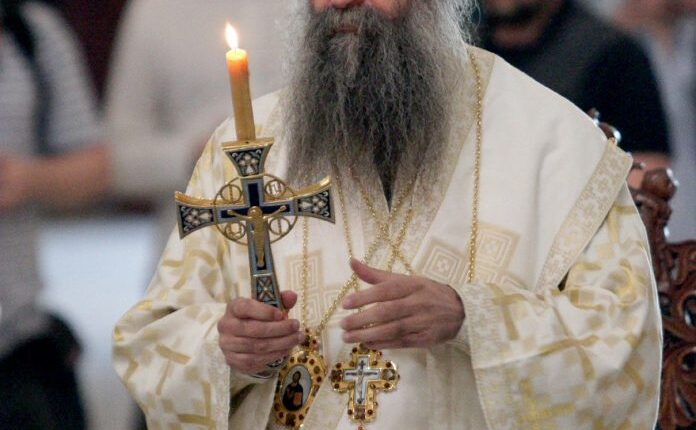 Patriarch of Porphyry on the state of affairs in Montenegro: Metropolitans enthroned in Cetinje for hundreds of years (VIDEO)

His Holiness Serbian Patriarch Porphyry spoke for the first time today about the opponents of the upcoming enthronement of Metropolitan Ioannicius.

He pointed out that so far he has not said a single word about the events in Montenegro, but that he recognizes the modern mechanism of thesis replacement.

– That is why I have not said a single word so far about what is happening in Montenegro, and we are really very sad and recognize the modern mechanism of substituting theses where you declare someone black in advance, where you declare him a provocateur, creator of all possible problems and then create a legitimate right to restrain him from leading the paths of his freedom which is at the same time love. Namely, for one normal, natural thing by which the church functions, and that is the enthronement of a bishop, and in this particular case, for centuries Orthodox metropolitans enthroned in Cetinje, someone declared that it should not be so, although we now have no other solution because we implement what is natural and normal, and we are defined as ‘someone who imposes something by force’ and as ‘someone who does not understand the situation’ and as ‘someone who provokes’.

– It’s like if someone told you – You can’t breathe air because that air doesn’t belong to you! And you can’t do without breathing because it’s a natural and normal thing. The enthronement and everything that the church does is always in the spirit of these words of Christ, in the spirit of that which is based on faith and prayer, in the spirit of humility and in the spirit of love. The Church acts and works always and exclusively from the Gospel. By its nature, it is not there to resolve any political misunderstandings, it is not even there to influence them, let alone make political decisions – said the patriarch of Porphyry.

The church is not here to deal with state issues, the patriarch explained.

– The Church is the body of Christ, which means the communion of all those who are baptized in the name of the Father, the Son and the Holy Spirit. The body of Christ in which, in the words of the apostle Paul, “there are no Greeks or Jews.” Let everyone be what they want according to their conscience, let them belong to whomever they want and let them organize their life in the best possible way, but if it is Christ’s and if he listens to the word of Christ, then he will always be a witness of peace – said Patriarch Porphyry.

The patriarch pointed out that the enthronement of Metropolitan Ioannicius should be based on faith, prayer, love and on constantly reminding ourselves that the word of Christ must be authoritative.

– If it is, we will have peace in our souls, and if it is not, we will be upset in the least – said the patriarch of Porphyry.

You can watch the video HERE.

Against the enthronement of Metropolitan Ioannicius, in the presence of Patriarch Porphyry, all opposition parties led by Djukanovic’s DPS, numerous non-governmental organizations and individuals.

Although the enthronement of the SOC metropolitan is traditionally held in the Cetinje monastery, they demanded that the act be moved to another building on the territory of Montenegro built in recent decades or at the SOC headquarters in Belgrade.

The Metropolitan of Montenegro and the Littoral of the Serbian Orthodox Church, Joanikije, confirmed that his enthronement will be in Cetinje on September 5, despite calls for it to be moved due to the raised tensions.

China’s president appears to spice up relations with Serbia go to – Information – providencejournal.com

Kindergarten Poletarac in Subotica, closed in June because of the security of youngsters and employees, opens its doorways on September 1