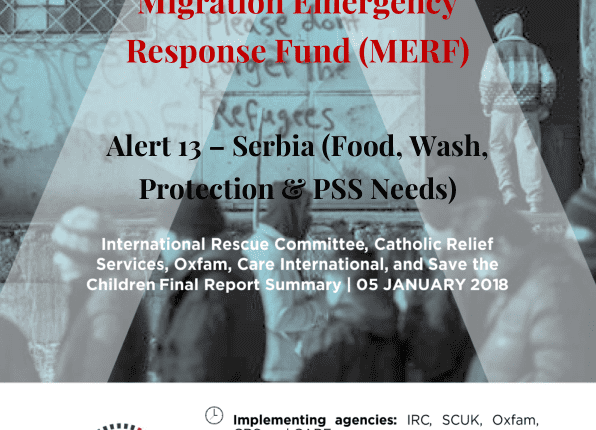 On Monday October 23rd, CRS, CARE and IRC issued an alert to address the major ongoing needs that are not being met in Serbia and that require bridge funding. Despite the efforts of the Start members to seek further long-term funding to meet ongoing needs in Serbia, it took some time to make decisions and meanwhile a large number of asylum seekers lived in poor conditions. In addition, a large number of newly arrived asylum seekers were registered in the first two weeks of October. The UNHCR sample profile of a group of 118 newcomers to Belgrade found that 40% were women and children and 60% were men.

Therefore, 5 projects have been awarded to meet ongoing needs until new funds are made available in early 2018:

CRS 3060 beneficiaries in 15 camps and 4 emergency shelters for unaccompanied minors and victims of human trafficking or family and gender-based violence were provided with basic cards through money cards implemented by the partner organization Philanthropy. In all camps and accommodations, Philanthropy made two distributions, with the exception of Principovac, where three distributions were made. The partner organization BCM provided migrants with psychological help 265 times 361 at 4 locations in the reporting period. The MERF project ensured the continuity of BCM’s mental health services to continue helping migrants overcome their frustrations and hardships and resolve their personal problems that lead to a further reduction in general dissatisfaction in reception centers. The partner organization Atina provided case management services for 92 people from risk groups. In Belgrade, Presevo, Bujanovac, Subotica and Bogovadja, case management services were offered to women and children who have survived or are at risk of becoming victims of gender-based violence and human trafficking. They also provided 13 urgent interventions for referred SGBV and HT cases and provided protection for 7 vulnerable people. The Shelter program is not just about accommodation, it is part of a comprehensive social inclusion program. All long-term beneficiaries receive advice, support in solving primary problems,
PSS, PT, customized services planning, assessments and monitoring.

MAINTENANCEDuring this project, additional food with additional nutritional value was provided for children, minors and pregnant / breastfeeding women, as these vulnerable groups are not covered by regular menus in most of the centers in Serbia. CARE’s food supply was overseen by the nutritionist who prescribed nutritional values ​​for different categories of beneficiaries. Feedback from the beneficiaries and the Commissioner has consistently shown that there is a widespread need for additional food, including milk with added vitamins for children and minors, fruit and juices, fortified biscuits and biscuits with added vitamins and jars of baby food. The food was delivered by the partner Novi Sad Humanitarian Center (NSHC) in Adasevci, Principovac, Krnjaca, Belgrade center. from partner Impuls in Sjenica and Tutin; and from partner Nexus in Pirot, Divljana and Bosilegrad.
In most of the camps, food was delivered daily, while Pirot, Bosilegrad and Divljana received assistance several times a week due to distance problems (although the number of goods delivered is the same as in other camps). Sjenica and Tutin also received assistance by providing bottled water due to the poor quality of the water in the area. In addition to food, the project had a protective component. Young men and boys / UAMs turned out to be the affected target group and received little or no attention from the protection services, as these are usually aimed at women and children. A total of 24 workshops were organized and carried out in the reception center in Presevo and in Miksaliste.

IRC Bridging the funding gap to ensure the continued delivery of specialized MHPSS services to prevent and alleviate distress, hopelessness, and the development of more serious mental health problems while ensuring longer-term funding. Teams of psychologists and cultural mediators advised people who need support, individually and in groups. In addition, training was provided for front service providers to develop their ability to understand MHPSS concerns and interventions, including strengthening resilience and coping mechanisms. Various workshops were held in the social cafes AC Krnjaca and TC Obrenovac: arts and crafts, English, IT, sewing, music, eco. Organized sporting activities were offered along with free coffee and tea and film projections. Not only has the stress of migrants been reduced, but they have been given new or improved knowledge and skills for the future. Formal education was supported by providing transportation, assisting the learning process, and mastering Serbian. For newly arrived refugees and migrants to Belgrade, protective monitors in a drop-in center in downtown Belgrade (Info Park Hub) made it easier for them to access urgent care, cultural mediation, language interpretation as well as assessment and referral to specialized protective services. Coordination, technical guidance and advice across the partnership were provided by the IRC. In addition, the IRC procured winter boots for migrants in the Krnjaca camp in Belgrade in response to the commissioner’s request.

Save the childrenthrough its partner Praxis, has provided 1,778 refugees and migrants with protective support, monitoring and information on:

Through its partner center for youth integration, SC supported 594 beneficiaries through a 24/7 drop-in center in the urban area of ​​Belgrade, which provided comprehensive protection services for the most vulnerable populations. The center focused on meeting basic needs, mainly in the form of a safe and protective environment, psychosocial support, information and / or referrals on the registration process, placement in camps, transportation of individuals and groups, and medical, social and psychosocial support and legal aid. Save the Children also supported the general functioning of Refugee Aid Miksaliste and the sharing of costs with other actors (MSF, UNHCR etc.). Our part included cleaning services and the physical security of the room.

In Obrenovac, the SC supported 160 beneficiaries through its partner center for youth integration by running child protection activities in and around the reception center and distributing NFIs based on a needs analysis. Protection services for unaccompanied boys included an individual case management support system, psychosocial support, leisure activities and semi-structured non-formal educational activities aimed at keeping children in the official protection system. Since the hygiene conditions in the center are poor and are constantly deteriorating, Save the Children supports the Obrenovac reception center with 500 beds.

Oxfam Trag Foundation partner distributed food to refugees and migrants traveling to Belgrade. The distribution was organized at Info Park Hub in Gavrila Principa 55, a protection and support center that specializes in newcomers as well as vulnerable groups and individuals. During the 43 days of implementation, the Trag Foundation distributed 5,200 bean meals, 5,200 pastries, 5,200 fruit juices, 2,600 breads (4 SOgr), 4,600 bottles of water and more than 3,000 liters of tea, made with 10 kg of tea and 50 kg of sugar. A total of 19 locations were covered and in the 43 days of their response 9239 beneficiaries were reached (3910 children and 1338 women).

"EVERY PENALTY IS MESSIONAL THAN A VIRUS" Dr. Janković: We proposed to shorten the working hours of the bar to six pm