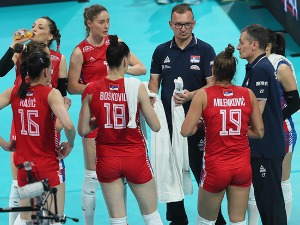 The selector Terzić was not satisfied with the efforts of the volleyball players in a duel with Hungary, although the difference in quality was obvious in favor of the Serbian team.

“My role is to explain to them how dangerous it is and that falling out of rhythm can be disastrous for the next games. It is their job to do what they think is necessary. We will see how it goes until the end,” Terzic told reporters.

The opponent in the quarterfinals will be France, which Serbia has already defeated once in the championship.

“In my opinion, France is certainly the most pleasant surprise at this European Championship. Not because of the results, but because of the way they play and the team they have. It can be seen that they are preparing the team for the Olympic Games in Paris. They are young and very promising. “They can’t always deal with top national teams, because they don’t have experience. We shouldn’t have any problems winning that game, but we could make a spectacle,” said Terzic.

Serbian volleyball player Tijana Boskovic said that the difference in quality against Hungary was more than obvious, but that they tried to play the best game possible.

“I hope that we will be even better in the quarterfinals. The upcoming matches are the most important in the tournament,” Boskovic said.

One yr for the reason that change of presidency in Montenegro (3): Maturity on the examination