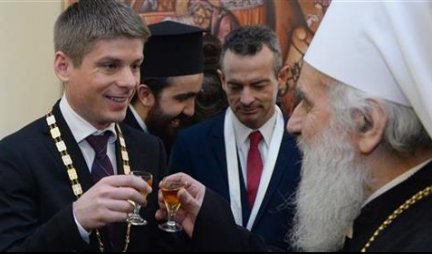 The captain of the Greek navy, Marinos Ricudis, who refused to take part in the attack of NATO forces on FR Yugoslavia, got his street in Nis.

That heroic move that cost him his military career. However, the Nis authorities did not forget that humane gesture and he finally got his street. One branch of Todor Milovanović Street in the municipality of Mediana in Niš changed its name to Marinos Ricudis Street, and all residents of Niš agree that it deserved even more.

– Life has many paths– he wrote a few days ago on his profile, after he found out that exactly one street in Nis was named after him!

We remind you that in the mission called “Angel of Mercy”, although a NATO member, Greece did not participate for political reasons. Nevertheless, the navy of this country sent its warship “Themistocles” led by Captain Marinos Ricudis to the Adriatic Sea.

When the order from the NATO command arrived to fire missiles at our country from this warship, Captain Ritsudis, instead of carrying out the order, turned his ship towards Greece and returned it to the port.

– As an Orthodox, I cannot take part in the attack on the fraternal people Said Captain Ricudis.

Although many sailors sided with their captain, as well as the people of Greece, Marinos Ricudis could not avoid a military court, because he refused to carry out the order, and he was tried before as many as nine courts. He was fired and sentenced to two and a half years in prison.

Nevertheless, Serbia has shown great gratitude to the man who consciously sacrificed his career and freedom. Almost everyone knows that “some Greek”, when the rest of the world either dropped bombs or kept silent about the injustice that was done, sided with our people.

The Holy Synod of Bishops of the Serbian Orthodox Church, Irinej, awarded the Order of the Holy Emperor Constantine to Captain Marinos Ricudis in 2018, because of his sacrificial love for the fraternal Serbian people, refusing to participate in the NATO bombing of our country.

– I am deeply moved and I could not believe that after 18 years, since I refused to take part in the unjust war against this people, I will experience honor and gratitude from my Orthodox brothers, the Serb brothers. All the sacrifices of your people, tradition, tradition, culture, were the most significant inspiration for me and I feel gratitude in front of all of you – Ricudis said on that occasion.

The citizens of Belgrade also showed their gratitude by dedicating a mural to the former Greek captain in Dorcol as a sign of gratitude. The mural was made on his birthday. Now, Marinos has got his street too.

– Graphite in Belgrade. My birthday present. He is beautiful. Thanks to all my Serbian friends. Greece – Serbia closer than ever – Ricudis wrote on his Facebook profile at the time.