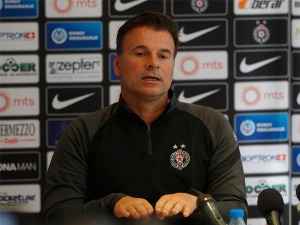 “It is clear in which direction we are thinking and it is clear that we must always go for the victory, because victory always keeps us competitive for the title. We are preparing after the national team break, the players are back and today we have the first joint training,” said Stanojevic. at a press conference at SC Teleoptik.

The head of the professional staff of the black and whites pointed out that the players returned in good condition after the national team matches, and he also referred to the new reinforcements of Nemanja Miletić and Quincy Menig.

“I see Miletic in the position of stopper, we need someone to rotate. He has not played a competitive game for three months, he is slowly getting into the rhythm, we want him to be well prepared. We all know what he can offer us.”

“Quincy Menig came as the player we wanted from the beginning of the transfer window. In agreement with the people from the club, we insisted on a side player. He comes from a competition where he was constant, he is physically ready and will compete for Kragujevac,” he said. is Stanojevic.

The match in Kragujevac will be the beginning of an important series of matches for the black and whites, who will play against Anorthosis next Thursday in the group stage of the League of Conferences, followed by the eternal derby against Zvezda in Humska.

“Tomorrow is an important game, we play against an opponent who is new to the league, a club that has a tradition. They played in different ways, they changed systems. They are able to play in different ways, but we will have the answer to everything.”

“We are not thinking about Thursday, it means nothing to me if we are not right tomorrow and do not continue through. In football, everything can change in seven days, I do not want to allow my players to do that. Personally, I am preparing the game as the most important in the next cycle.”

Stanojevic said that he wants all three matches to end in victory.

“Tomorrow we are the favorites and we have to win, because everything but victory is a failure, with respect for the opponent. We have Anorthosis on the side, a direct competitor. I don’t know what condition we will be in. It’s important that when you play a derby you don’t let “I don’t think Partizan has been in that situation for a long time. It’s the beginning of the championship, but on the other hand, I wish we had all three victories,” Stanojevic concluded.