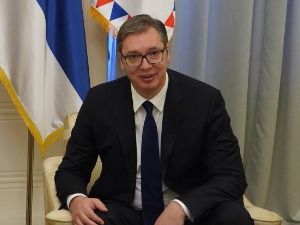 “Celebrating the 107th anniversary of the Army, as members of the Serbian Army with the longest tradition, despite the complex conditions in which you work, your units this year realized a number of tasks, achieved notable results in training and managed to maintain the required level of operational abilities “, it is stated in the greeting card.

The congratulatory message states that the Army successfully, despite numerous challenges and provocations, managed to ensure peace and stability in the south of Serbia in the most professional way by serving the homeland, and especially to keep the administrative line with Kosovo and Metohija safe, once again showing why it is one of the most important factors of modern military organization.

Vučić stated that the citizens of Serbia can be peaceful, because the Serbian Army is with them wherever they are.

“I congratulate you on the holiday, convinced that in the coming period, with the modernization and modernization of units of your kind, you will continue to fulfill the set tasks professionally and with quality,” reads the congratulatory message from President Vučić.

That is how champions do it – Information on-line