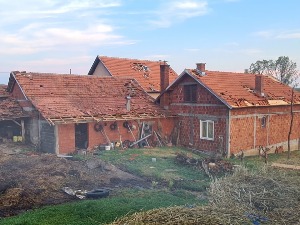 The town within the neighborhood of Rača and Topola destroyed crops, broken the roofs of homes

In Rača, the storm hit the villages of Jarušice, Sepci and Saranovo. The greatest damage has been recorded so far in the village of Saranovo, where crops, roofs on residential and economic buildings, churches and schools have been damaged, the Kragujevac Emergency Situations Administration confirmed to RTS.

At the session of the Emergency Situations Headquarters in Rača, a state of emergency was declared in six villages: Saranovo, Đurđevo, Jarušice, Borci, Malo and Veliko Krčmare.

About 400 households do not have electricity, the roof structure of 200 buildings was damaged, as well as the roof of the village church and the “Karađorđe” school in Saranovo.

There are machines on the spot, which are repairing the damaged road infrastructure, EPS teams and the damage assessment commission.

In a strong storm, in the Topola villages of Junkovac, Šume and Natalinci, some roofs and local roads were damaged. In addition, there is currently no electricity in Šume.

During the day the storm followed by the hail also hit the Čačak area.