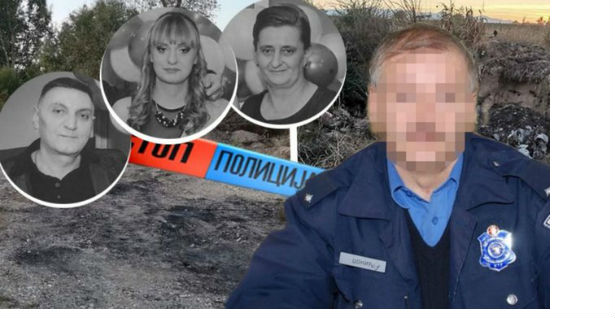 STRONGEST EVIDENCE: The secret of Djokic’s murder written on a note? Dzonic’s relatives wanted to help, he killed them!

Goran Džonić overlooked a piece of paper with the inscription “For Goran Džonić”, lost in money buried after the murder of Goran, Gordana and Lidija

The entanglement surrounding the triple murder in Moravac near Aleksinac will be unraveled by the investigation, during which the police have already found evidence that undoubtedly indicates that retired firefighter Goran Džonić killed his cousin Goran Đokić, his wife Gordan and daughter Lidija because of the money.

A note found next to the money buried after the murder, which reads “For Goran Džonić”, is one of the strongest pieces of evidence against him, according to a source close to the investigation.

The prosecutor’s office asked Džonić about the note, that is, the paper that was found among the banknotes in the red envelope of “Western Union”. That envelope was in a canvas bag buried in an orchard near his son Stefan’s house. Instead of a meaningful answer to the question of where that paper came from, he gave an incoherent explanation: “I certainly didn’t write that note because I could never write with such a handwriting.”

It is most probable that the murdered Goran Đokić, the owner of the exchange office from Aleksinac, had a separate amount in the bunker in the trunk for the agreed loan to Džonić. He inserted a note among the banknotes so that he would know that it was a sum for his cousin, whom he trusted. The killer decided to take the money, so that he could get rid of the relative who lent it to him so that he would never have to return the money – the source from the investigation explains this finding.

In a rush to cover up all traces of the murder, Džonić took a bag of money from the trunk of Đokić’s Passat, but he did not see the note in the dark. That is now one of the key pieces of evidence against him, in addition to the DNA traces on the foreign currency buried on Dzonić’s family property.

It is about 43,000 euros, with which smaller sums were found in their garage, behind the mirror and in the vacuum cleaner. In total, more than 50,000 euros were found with him. He speculates that Đokić had more than 200,000 euros in his trunk.

Dzonic, therefore, pressed by debts, asked for and received a loan from Djokic and arranged the handover for September 26 in the evening, when he knew that Djokic was coming to Moravac. He waited for them on the street when they headed back to Aleksinac to take a loan and asked them to take him with a bucket of gasoline to the place where his scooter ran out of fuel.

That night after midnight, they took him to the former separation of Dudova bar. There he killed them, set their bodies on fire and drove their Passat 12 kilometers away, where he had actually parked the scooter the day before. There, he took money out of the trunk, set fire to the car and stopped by a scooter first at the family orchard, and then at home.

In one of his statements to the prosecutor, Džonić mentioned a bag and two bags of money that were allegedly brought by the brothers Aleksandar and Kostadin Milošević, whom he accused of murder, after they set fire to Đokić’s trade wind.

– The bag was found, but not the bags. The Milosevics have an alibi for that night, but it is not excluded that the bags really existed because Dzonic often mixes reality and fiction in his statements. The possibility that the rest of the money of those killed is in those bags is not excluded – this source states.

In October, after the murder of Djokic, Dzonic returned 10,000 euros to his cousin Ivan Dzonic. He borrowed so much from Ivan four years ago to help his son Stefan with the purchase of the house, so the prosecution has reasonable suspicions that he returned the debt with Djokic’s money. The suspect said in the investigation that this was not true and that he had recently taken out a loan, so that he used part of that money to repay the debt to Ivan because he failed to earn money until October this year, despite being temporarily working in Austria. It is suspected that Goran Džonić managed to earn only 2,000 euros for the debt to his cousin, and that he added 8,000 euros from Đokić’s money that he stole to complete the amount to repay the debt. The prosecution ordered the obtaining of documentation from the credit bureau for Goran Džonić in order to verify his claim about the raised loan.