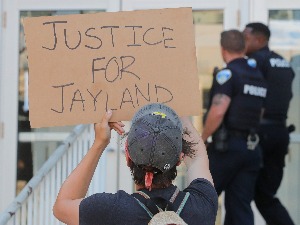 The family’s attorney, Bobby DiCello, said Walker was killed by police, citing a police video that should be made available to the public tomorrow, Reuters reported.

Local officials said the incident happened when officers tried to stop Walker for a traffic violation while he was driving on Monday morning.

Walker fled, they said, and Akron police said officers reported a gunshot from the suspect’s vehicle.

After several minutes, Walker got out of the car and ran away as officers chased him and shot him, saying he posed a deadly threat, according to a police statement released Tuesday.

Protests were announced over the weekend, and DiCello described the video as brutal and said Walker’s relatives were worried that the protests, which have already been going on for several days, could turn violent over the weekend.

Walker in a series of police killings of African-Americans in the US that critics say are unjustified, including the killing of George Floyd 2020 in Minneapolis that sparked worldwide protests against police brutality.