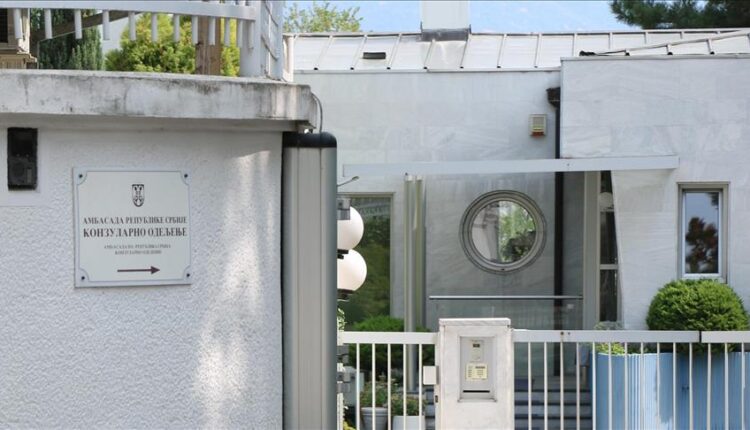 The Serbian government on Monday withdrew its officials from their diplomatic posts in Macedonia amid claims about intelligence activities.

The recall of Serbia’s diplomatic staff was first announced by the Ministry of Foreign Affairs of Macedonia.

It said it received a note from the embassy of Serbia in Skopje, saying its staff were being recalled for urgent consultations in Belgrade.

Later on, Macedonia secured the empty Serbian embassy building with over 100 police officers as per Vienna Convention rules.

Addressing the media in Belgrade later on Monday, Serbian Prime Minister Ana Brnabic said the move was “not a small thing”.

Serbian President Aleksandar Vucic said the ambassador and officials were withdrawn because they had information about what he called “very offensive intelligence against the organs and institutions of Serbia”.

Serbian Foreign Minister Ivica Dacic told the local Tanjug news agency some of the staff would return to Skopje next week, and Serbia’s ambassador would also go back after the Belgrade consultations.

He also said it had been “unequivocally established that there was increased intelligence on Serbia in the whole of the embassy,” adding that a “foreign factor” was involved.

“We will take measures to protect our interests and reassess our capacity to work in such circumstances. We undoubtedly want good relations with Macedonia, because we are neighbors, we have common interests, we are two close peoples,” Dacic added.

Since 2015, Macedonia has been going through a long-running political crisis triggered by a wiretapping scandal.

Although a new Macedonian government seems to be putting an end to months of political uncertainty, Monday’s “intelligence” development with Serbia could generate fresh tensions in the region.

Macedonia declared its independence from Yugoslavia in 1991, and since 2005 has been an EU candidate country.