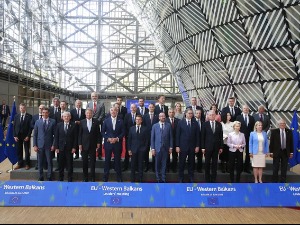 After the press conference of European Council President Charles Michel, European Commission President Ursula von der Layen and French President Emanuel Macron, which was supposed to be dedicated to the Western Balkans, was canceled, the high EU official said that the meeting the perspective of the Western Balkans and the future of the region in the European Union “.

He conveyed to journalists in Brussels the position of the European Council that “war in Ukraine put EU enlargement in focus “and explained that it means progress in the accession process through reforms, strengthening integration, but also resolving bilateral and regional disputes such as the normalization of relations between Belgrade and Pristina and the internal political crisis in BiH.

“It also means that accession negotiations with Northern Macedonia and Albania should begin without delay, which is an absolute priority, as well as resolving bilateral issues between Bulgaria and Northern Macedonia,” the EU official, who wished to remain anonymous, added.

An EU official added that they are on meeting in Brussels EU and Western Balkans leaders discussed an initiative to form a European political community as a political platform on which participants could maintain exchange and coordination across the European continent.

The EU will continue to support the region, including helping it face the challenges posed by the war in Ukraine, for example by linking them to EU food and energy security initiatives, supporting them in strengthening cyber security, tackling hybrid threats and disinformation “, the European Council said.

It is added that the EU Economic and Investment Plan for the Western Balkans will provide up to 30 billion euros in investments to help the region in economic recovery and rapprochement with the EU, as well as in the implementation of projects that improve the region’s connectivity and resilience.

The high EU official concludes that the leaders of the EU and the Western Balkans, at the meeting in Brussels, expressed their support for the people of Ukraine and agreed to continue with regular meetings and engagement.