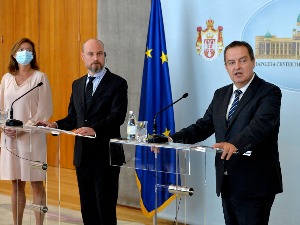 It’s over the second phase of the inter-party dialogue on electoral conditions, with the mediation of the representatives of the European Parliament.

Parliament Speaker Ivica Dacic, who met with EP representatives Tanja Fajon, Vladimir Bilchik, Eduard Kukan and Knut Fleckenstein, said the government had accepted many things in election conditions that did not exist before, such as a temporary oversight body to monitor the media.

Speaking about the temporary supervisory body, Dacic said that it will consist of 12 members, that six will be proposed by REM, and six by the opposition, and that body will, he explains, have the role of monitoring the media, reporting to the public on the application of the Rulebook for public services.

Dacic told reporters that the government in Serbia will realize everything that was accepted as an agreement, and that the opposition should decide in the coming weeks whether it will participate in the work of those bodies.

“I expect that in the coming days and weeks, the parties will state whether they want to participate in that process. There will be places in the REC, in the temporary supervisory bodies,” Dacic pointed out.

As difficult as the talks were, progress has been made, Dacic said, adding that the government was ready to compromise and that there were parts with which it did not agree.

Vladimir Bilchik stated that they identified in the document a series of measures that could improve the political conditions for the next elections.

He adds that the boycott is not a way to make progress in Serbian democracy and the European path.

“I hope that everyone will keep that in mind in the coming weeks,” Bilcik said.

In the end, Dacic said that the improvement of the election process will not be endangered by whether the document will be signed or not.

After yesterday’s discussion on the media, at the first session of the inter-party dialogue, part of the opposition withdrew from the negotiations.