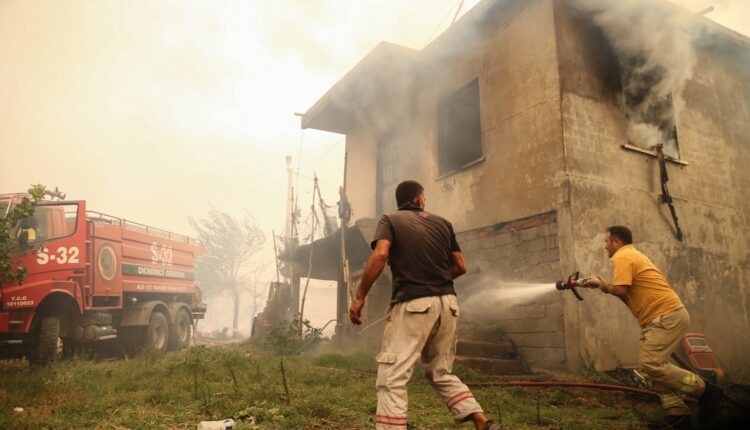 Forest fires spread to a huge area in the southern Turkish provinces on Thursday, from summer vacations from Antalya to Adana and Mersin. Fires broke out on Wednesday and threatened residential areas. Their almost sequential nature raised concerns that they could be the result of a series of arson attacks.

The worst fire occurred in Manavgat, a city in the province of Antalya popular with holidaymakers. It broke out on Wednesday lunchtime in four different places in the city surrounded by forests. It did not reach the city center but affected the villages nearby. Eighteen villages and neighborhoods have been evacuated while authorities announced that 62 people have been hospitalized for burns and smoke inhalation. Three people were killed in the fire, and the Disaster and Emergency Management Agency (AFAD) announced Thursday that 122 people were “affected” by the fire, while 58 were still being hospitalized.

Antalya firefighters, accompanied by crews from nearby towns, joined the fire fighting while helicopters and planes dropped fire retardants on burning buildings and fields in and around Manavgat. President Recep Tayyip Erdoğan said on Wednesday that “our citizens who have suffered from the fire will be given all the support they need,” adding that an investigation into the cause has been launched. The mayor of Antalya, Muhittin Böcek, had previously indicated that the fires were “suspicious” as they broke out in four different locations at the same time.

Fahrettin Altun, communications director for the Turkish presidency, said on Thursday that the authorities had launched a “comprehensive investigation” into the causes of the fires. “Those responsible will be held accountable for these attacks on nature and our forests,” he said in a tweet.

The Ministry of Agriculture and Forestry Bekir Pakdemirli, which was visiting fire-ravaged areas, told reporters Thursday morning that the fire was largely under control. However, another fire broke out in the neighboring town of Akseki on Wednesday evening and is now threatening Manavgat after spreading to the town due to wind. Pakdemirli announced that an 82-year-old man was killed in the Akseki fire. Later on Thursday, Pakdemirli updated the number to three, with two more deaths in Değirmeli, a rural neighborhood. The new fire resulted in the evacuation of two districts in Akseki and the evacuation of an unknown number of homes in five districts of Manavgat.

In some places, people fought the fires themselves by spraying water from hoses and buckets. The fires also resulted in mass deaths of livestock in rural areas while locals struggled to get their herds to safety. Hasan Ünal, a local from the Ulukapı district, about 25 kilometers from the site of the first fire in the Yeniköy district, spoke to the Demirören News Agency (DHA) on Thursday about the incident. Ünal stated that he fled his home with his family when he learned of the fire. “I drove through the surrounding neighborhoods and warned people about the fire. Few people left the fire or intervened. If they did, it wouldn’t spread much, ”he complained.

Galip Kara, another local, said tearfully that he barely saved the animals in his stable. “I opened the door and took her outside, and then we escaped and climbed a hill that the fire couldn’t reach. The last time I saw the fire was directed towards the center of Manavgat, ”he said. The damage was great in the villages. Television footage from the area showed flames, although weak, but could still be seen in burned buildings. Akseki district governor Volkan Hülür told the Anadolu Agency (AA) that the fire fighters managed to respond to the fire in Akseki within 15 minutes. Nevertheless, the rapidly spreading fire burned “80% of the houses” in the Kepezbeleni district.

Pakdemirli announced that the fire in Akseki was still burning, although they had managed to control the fires in Manavgat. He said 41 forest fires broke out on Wednesday, only 10 of which were still burning while others had been contained. He said 10 people were stranded due to the fire at Oymapınar Dam in Manavgat. A few hours after his testimony, authorities announced that all 10 had been rescued and were safe. According to the minister, the fires on Thursday morning were not life-threatening; Nevertheless, the emergency services would take additional measures, since the fires had not yet completely burned out and could spread again if the wind changed course and the flames were fanned. He assured the public that all public authorities had been mobilized to contain the fires and help the people affected.

Another fire broke out in Marmaris, another popular resort west of Antalya, raising concerns, although it was much smaller than the Manavgat fire. Firefighters battled a fire that broke out in an area where another forest fire devastated a small patch of forest last month. TV footage showed flames approaching a hotel-strewn area. Hours later, a fire broke out in Bodrum, a place probably more popular as a resort than Marmaris, in an area connecting the city to the Milas district in Muğla Province.

Another small fire in Datça damaged a pine forest on Thursday.

Elsewhere, a forest fire broke out on Wednesday evening in the Kozan district of Adana and again strong winds fueled the flames. Firefighters fought the flames until the wee hours of Thursday as seven villages near the epicenter of the fire in a rural part of the district were evacuated. Cumali Yücel, a local, told the DHA that “a small fire” on the bank of a reservoir quickly got out of control and reached their neighborhood. Yücel, who lost his home in the fire, said security forces brought them to safety. Forest fires hit Mersin, Aydıncık and Bozyazı on Wednesday. Forest fires in pine forests lasted until Thursday. In the early morning hours of Thursday, another fire broke out in the Silifke district, which led to a brief closure of a road connecting Mersin with Antalya.

Also in Adana, a fire broke out in a forest in Aladağ district and resulted in evacuations while ten people trapped in a burning area were rescued. Three neighborhoods near the fire have been evacuated. Adana Governor Suleyman Elban told reporters that 22 forest fires broke out in Adana on Wednesday and twenty of them were extinguished on the same day.

In the neighboring Osmaniye province of Adana, firefighters tried on Thursday to contain the flames of a forest fire that broke out near a village on Wednesday. Helicopters and planes poured water on the fire while bulldozers struggled to clear the way for firefighters trying to reach the site by land. 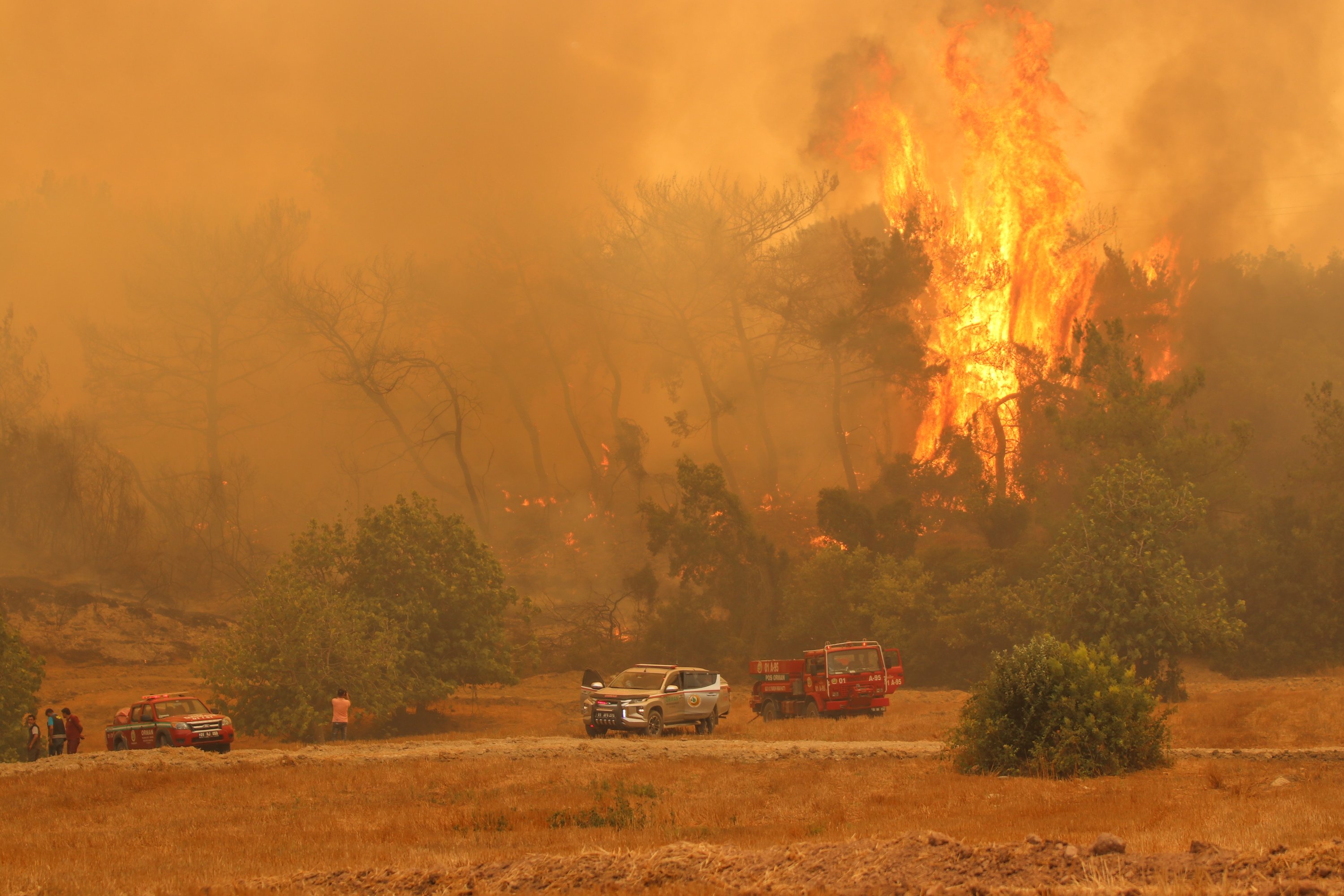 Forest fires are common in the Mediterranean and Aegean regions of Turkey during the dry summer months, although some forest fires have been attributed to arson. Temperatures were around 37 degrees Celsius in Manavgat, while similar levels and higher temperatures were reported in other areas affected by the fire.

I Bought a ‘Delicate’ Breakthrough Case. Right here’s What I Want I’d Identified.