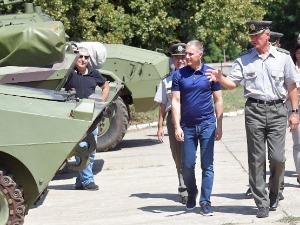 Nebojsa Stefanovic said that it was a pleasure to see how far our military industry and the Military Technical Institute were progressing and how much our engineers and experts from the Institute contributed to making our army as efficient as possible. .

“I had the opportunity to see everything that is already in the prototype or zero series, what will soon be part of serial production and enter the armament of our army, and we also talked about some new projects,” said Minister Stefanović, the Ministry announced. defense.

The Minister also talked to young engineers, who got a job at VTI in mid-April, and whose admission significantly strengthened the Institute’s capacities.

“I am really proud that our Military Technical Institute today lives a different life, that it employs new engineers, young people, and that it thinks about that kind of its future. Today, they work together with older colleagues on the development of turrets, cannons, electronics, armored bodies. and everything that is an integral part of the funds that are shown today, “said Stefanović.

He pointed out that he was proud of all the employees in VTI and thanked them for their great work and sacrifice.

“There is no respite for them, no summer for them, no high temperatures, they are doing their job diligently and dedicatedly. I am glad that today we have new energy, which guarantees that our army has a serious future in terms of modern weapons and that It will certainly be the leader in this region, “Stefanovic said.

As many as a billion people who smoke on the planet (2): Greater than a 3rd of Serbia is in smoke