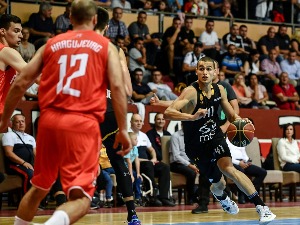 As part of the preparatory period for the upcoming season, Radnicki from Kragujevac and Partizan played a humanitarian match to help the publishing endeavor “Svetinje u Vasojevica”.

In front of a large audience in the “Jezero” hall, the team from Kragujevac gained an advantage at the very beginning of the match and held it during the first two quarters.

Partizan, which played without Panthers, Ledej and Kuruc, played an offensive rather modest first two quarters and scored only 20 points in two sections, so the result at halftime was 33:20 for the home team.

After the break, the black and whites reduced the gap with a better and calmer game, and at the end of the third period, they took the lead, which they kept without any problems until the end of the game.

Aleksa Avramović scored 16, and Nemanja Dangubić 15 points for Partizan. Madar and Slovenian Gregor Glas, who is rehearsing for Partizan, added 11 points each.

Filip Dumić and experienced Raško Katic were in a special mood in the ranks of Radnički, who scored double-digit points and were responsible for the home team’s advantage in the first two sections.

In the previous part of the preparations, Partizan beat the team of Zlatibor in Cajetina, while at the tournament in Opatija they recorded a defeat by Cibona and a triumph over Cedevita Olimpija.

Zeljko Obradovic’s team will have the next test in Istanbul, where they will participate in the tournament hosted by Fenerbahce on September 11 and 12, and Monaco and Unix from Kazan will also perform.

The Black and Whites will meet Monaco in the semifinals of the tournament on Saturday, September 11, for which former Partizan basketball players Danilo Andjusic and Leo Westerman play.