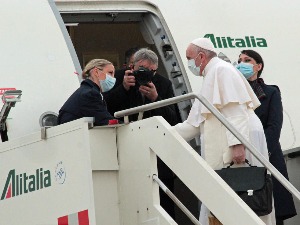 The visit to Iraq is the first international trip of Pope Francis since the beginning of the coronavirus pandemic. He was greeted at the airport by Iraqi Prime Minister Mustafa al-Qadimi.

Pope Farnia is on his way to Iraq, and he is glad that he is traveling again, and that this is “a symbolic visit and his duty to the country that has been a martyr for so many years.”

For epidemiological and security reasons, this is the most risky visit that the 84-year-old pope, as he pointed out, considers “his obligation”.

The pope will try to reconcile the warring Christian community and strengthen the inter-religious dialogue, within which he will meet with the leader of the Shiite Muslims in Iraq.

He will also hold Mass at the stadium in Irbil, in the north of the country.

Iraq will deploy about 10,000 members of the security forces in order to protect the Pope, and the curfew is already in force due to the coronavirus.

Many Christians fled the country

The number of Christians in Iraq has decreased from 1.4 million to about 250,000 in the last two decades, which is less than one percent of the population.

Many Christians fled the country because of the violence following the US invasion of Iraq in 2003, when Saddam Hussein was overthrown.

Also, tens of thousands of Christians were displaced when Islamic State jihadists conquered the northern part of Iraq in 2014 and destroyed churches.

Earlier, Pope Francis pointed out that Iraqi Christians must not be betrayed for the second time, after Pope John Paul II canceled the planned trip in 1999 because the agreements with President Saddam Hussein failed.