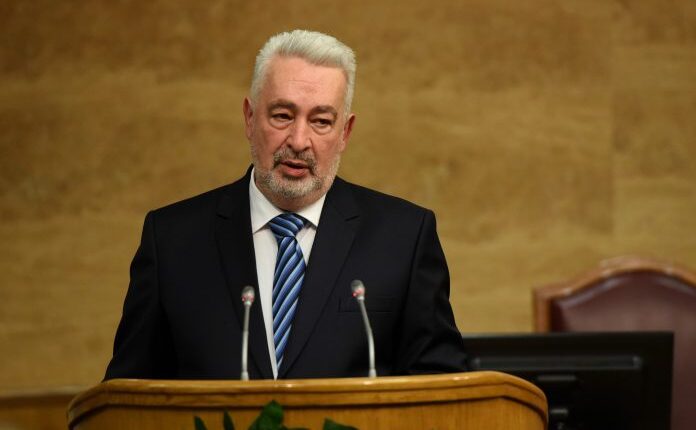 Krivokapic’s cabinet assessed that it is very dangerous for Montenegro to advise Djukanovic, “a man who personally calls for disobedience and resistance.”

This is due to the Government’s position to respect the rights of citizens in the free exercise of religious rites.

A Montenegrin government statement issued on current political tensions, which is heating up in the country, said that preserving peace and stability, respect for human rights and freedoms and economic recovery were “the devastated country left by the previous regime”, the priorities of the Montenegrin government.

“Everyday fueling of tensions, encouraged by public appearances, and a statement in the Prosecutor’s Office, in which former police director and current security adviser to the President of Montenegro, Veselin Veljovic claims that by calling for disobedience to law enforcement, he expressed his personal position. other responsibilities for their actions “, it is noted in the announcement.

It is also pointed out that Veljović, as a “promoted coordinator and ringleader of retrograde and protector of interest structures”, is obliged to know, as it is stated, that the time of bragging has passed, in which an individual expressed the attitude ‘the state is me’, and guided only by agreed interests “, RTCG reports.

It is estimated that Veljović, as a public official, takes responsibility for preventing or obstructing the performance of religious rites, which is qualified as a criminal offense, for which he is threatened with imprisonment for up to two years, or up to three years if performed by an official.

“It is very dangerous for the state and its stability to be advised by the President of Montenegro within the framework of security, a man who personally calls for disobedience and resistance to the state, due to the Government’s attitude to respect the rights of citizens to freely practice religious rites.” It is a hall of chaos, into which Djukanovic’s advisor obviously wants to drag us, after order and responsibility are finally established in the country “, they say in the cabinet.

The cabinet estimates that the citizens of Montenegro now have the opportunity to see “how much the defeated previous regime cares about peace and progress in Montenegro.”

“After they indebted us in record amounts, now they would like to endanger civil peace. Once again, citizens have the opportunity to see how patriotic the DPS and its satellites are for our country and its progress, and how much they care about a successful tourist season. Obviously, in proportion to the loss of privileges, the love for Montenegro is also lost. And then it is clear why, without choosing the means, the whole society is being pushed into chaotic scenarios “, it is stated in the announcement.

They also estimate that, when the independent Prosecutor’s Office comes to life, it will be absolutely obvious why “so many scams are rising these days”.

“It is precisely the fear of facing independent institutions and accountability that is the main motive for expressing ‘concern’ for the survival of Montenegro and the Capital,” the statement said.

They assess the attitudes of President Djukanovic as manipulative, who they say allegedly advocates for peace “while he has active recruiters of interesting assailants in his cabinet who undermine the constitutional order and state system.”

“However, until his term expires, President Djukanovic has an additional obligation to respect the Constitution and keep the peace, not to remain silent, while Councilor Veljovic publicly declares himself as a ringleader and instigator of anti-state and anti-democratic actions,” Krivokapic’s cabinet said in a statement.

Recently, in the author’s text for Podgorica’s Pobjeda, Veljović called for disobedience of the police and mass gathering of citizens during the enthronement of Metropolitan Ioaniki in the Cetinje monastery.

Barcelona barely “survived” the go to to Bilbao, a mistake within the second spherical

GET READY FOR RAIN AND THUNDER! Right here is what sort of climate awaits us within the subsequent seven days!