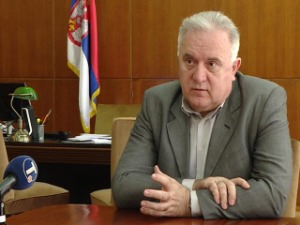 When it comes to the first concrete moves, Minister Dmitrović points out that a public debate on amendments to the law on financial assistance to families is starting these days, emphasizing that everything will be done so that the solutions are in favor of mothers.

He explains that he is touring Serbia, and recording the terrain, as he says, where strategic documents should be presented at the end of the year or the beginning of next year, ie the solution to the problem whose weight is best shown by the data of the Republic Bureau of Statistics – that in Serbia last year doubled more dead than born.

In an interview with Tanjug, Dmitrović says that the decline in birth rates that has been recorded in our country in the last few decades, and which has intensified in the last 20-25 years, is characteristic of the entire country.

“We have, from rich municipalities to the least developed and middle-developed ones, a negative ratio of mortality and birth rate, which is huge,” he points out.

He reminds that the state reacted three years ago, which, as he says, is proof that the political leadership understood the scale of that problem.

In 2018, the Government of Serbia set aside 566 million dinars for population policy measures, or five times more than a year earlier. The state has committed itself to increased inspection control of employers, so as not to discriminate against women who want to give birth, and to invest in education and better working and living conditions for children with disabilities or some difficulties, and Dmitrovic says that has given certain results.

“The crown made a mess”

“But the crown created chaos,” he states, and as one of the consequences of the pandemic, he states that, for example, 10,000 marriages were concluded in Serbia less than a year earlier in 2020, and that, as he says, he wants to believe that it is a consequence. measures introduced against the pandemic and the fact that “Serbs want to organize weddings with 500 people …”.

But he adds that he thinks the causes are multiple.

When it comes to the Law on Financial Support to Families with Children, according to which, among other things, all mothers who have less than 18 months of work before starting maternity leave receive a lower salary compensation than they would receive under the old law, and whether they will support the initiative for a different distribution of funds for the first, second, third, fourth child … Dmitrović says that the Ministry can help.

The attitude of employers towards women

He will personally say that he will submit an initiative to the government to change the problematic attitude of employers towards women who want children.

“A 26.27-year-old woman comes to her employer and says that she has become pregnant … At that moment, she is the number one enemy in that system for that man, and those women rarely return to the same positions and receive the same salaries. they are harassed in all possible ways, and especially if they have one child and are waiting for another, then they are in a hellish situation in those companies “, states Dmitrović.

He notes that he has to sit down and talk about it.

“That some private strong companies, banks, insurance companies, put in the contract to young workers that they cannot stay pregnant for another 10 years. We have to sit down and see what the state can say to employers, so that they do not act like that,” says Dmitrović. .

He also states that not much can be done without the support of the entire government, and points out that the Ministry of Village Care is the closest “partner” in solving the demographic problem and stopping the village from shutting down.

The idea to buy abandoned houses

“We have an idea to buy houses that have been abandoned, to renovate those properties and to announce a competition for young people who want to return to those small towns, to villages. We want to examine the terrain and invest, both the government and the local self-government.” states Dmitrović.

Because, he says, they came to the realization that it is a shame to live in the countryside and that it is an insult to be a peasant.

“Then why would anyone create opportunities for their children to stay in the countryside,” he asks.

He reminds that since 1945, our country has had a strong migration of the population from the villages to the industrial zones and cities, where, he points out, no attention was paid to what would happen to the villages.

“We lost 4,000 villages, and the state should and must help there. No one has and will never improve the birth rate in solitaires and apartments. I’m not saying that everything should be moved to the countryside, but a measure should be found between urban development and renewal of small towns,” he concluded. Dmitrović.