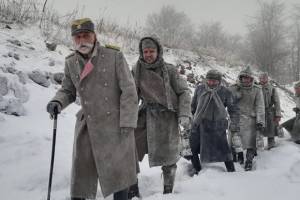 BELGRADE: LA-based distribution company House of Film has acquired the worldwide distribution rights for the Serbian historical drama King Peter the First / Kralj Petar Prvi, directed by Petar Ristovski. The film, supported by Film Center Serbia, was Serbia’s application for the Oscar race in the best international film category for 2019. The film will be dubbed into English.

The true story of the Serbian King Petar Karađorđević takes place in the First World War. Despite winning their first two battles, the decimated and hungry Serbian army had to retreat across the frozen mountains of Albania. All seemed to King Petar to be lost until he found consolation in a vow he made to a soldier’s mother: to find her son among the lost soldiers and to give him a pair of socks that she had made for him.

The project, which was adapted from the popular novel by Milovan Vitezović, won the Film Center Serbia 2017 competition with a focus on national feature film projects and received a grant of 39.9 million RSD / cca 330,000 EUR. The film is a co-production between Serbia’s Zillion Film and Greece’s Steficon.

It is the feature film debut for the young director Petar Ristovski, son of the actor Lazar Ristovski, who plays King Peter. The screenplay was written by Vladimir Ćosić, Milovan Vitezović and Petar Ristovski. The director of the photography is Dušan Joksimović. The director and writing team were also behind an eleven-part TV series with the same title.

Lazar Ristovski (Zillion Film)
This email address is being protected from spam bots! JavaScript must be activated so that it can be displayed.