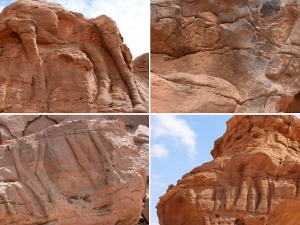 Researchers first estimated that animal depictions originated about 2,000 years ago. However, the latest study concludes that this is a work that is between 7,000 and 8,000 years old.

For researchers, more precise determination of age was a real challenge, because, unlike drawings in caves, there are often no organic materials in such representations that can help define details and even age.

The experts managed to investigate and determine the traces of the tools that were used, they also tested the bones of the animals they found at that location, all with the goal of establishing the time when the camel sculptures were created. A total of 21 three-dimensional depictions of camels were discovered.

Thus, the latest data show that they are older than the ancient landmarks of Stonehenge (5,000 years) or the pyramids at Giza (4,500 years).

Sculpture, that is, a life-size relief depiction of a camel on desert rocks in northern Saudi Arabia, is a rare type of artwork.

The latest analysis was published in the Journal of Archaeological Science and was led by researchers from the Saudi Ministry of Tradition, the Max Planck Institute and King Saud College.

It was discovered that these are the “oldest preserved reliefs of large dimensions” in the world.

“We are now able to connect this work with the period in prehistory when the pastoral population of northern Arabia created works of art from stone and built massive stone constructions called mustatil,” the study authors state.

The researchers found that different scientific strategies were used to determine the age of the site, and the influence of estimated weather conditions, erosion was taken into account, while fluorescence X-ray spectrometry was also used – to measure the density of the coating.