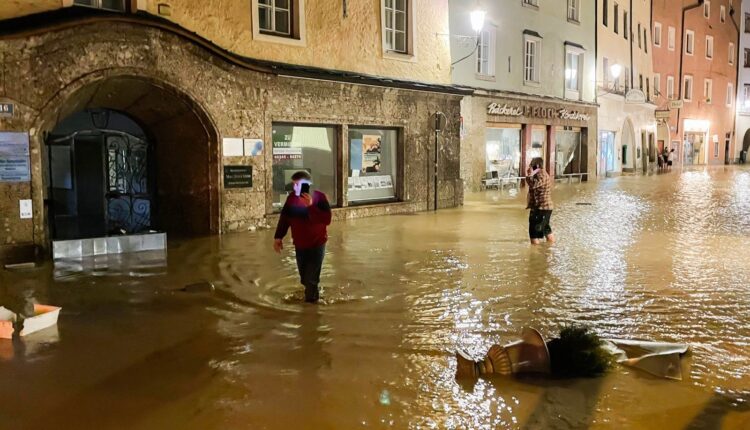 A heroic deed by an Austrian saved the lives of a Turkish couple in Hallein, Austria.

Hallein, a city near Germany’s border, was one of the hardest hit locations from this week’s floods, which killed dozen in Germany and other European countries. When the downpour sparked flooding in the city, Salih and Ayşe Karaaslan faced a tough decision: cross the street their restaurant was on to get to a safe spot when the floods flooded the venue, or stay. They decided to wade through roaring waters only to be swept away by the strong current. At that moment, their neighbor Alexander Eisenmann jumped into the water and pulled the couple to safety after an exhausting fight.

The video of the rescue was shared by Turkish Deputy Foreign Minister Yavuz Selim Kıran, who also thanked Eisenmann online by tagging him on Twitter with a thank you message in German. “Mr. Eisenmann’s heroic actions, borne out of humanitarian responsibility, deserve recognition. We thank him from the bottom of our hearts,” tweeted Kıran.

Salih Karaaslan, who comes from the northern Turkish province of Ordu, reminded the Anadolu Agency (AA) of the moments of horror during the floods on Saturday. Karaaslan and his wife Ayşe run a restaurant in downtown Hallein and he noticed that the flood was quickly filling the restaurant’s garden. In about five minutes the water reached a height of more than three feet and Karaaslan was shocked to see a car dragging down the street.

He told his wife to go, but she was shocked and couldn’t move. Karaaslan called the police and fire brigade to the rescue, but no one came to help. “We had to make a decision. Either we cross the water to the other side or we drown, ”he said. Just as the couple reached the other side, a wave tore Ayşe away. Salih managed to grab her by her sweater, but he himself was almost powerless against the relentless force of the floods.

“At that moment, our Austrian neighbor stepped in. He helped me and together we managed to get to the other side, ”he said. Then the couple climbed a high wall and waited for the fire department to rescue them. His wife Ayşe, who was slightly injured in the incident, was treated in the hospital.

The Turkish ambassador in Vienna Ozan Ceyhun and the Salzburg consul general Berkan Pazarcı contacted the couple and asked if they needed anything. “A lot of people came to our aid and we don’t need anything. We only need help from the embassy as we lost our passports and some other official documents in the flood. The Consul General has promised to help us, ”said Salih Karaaslan.