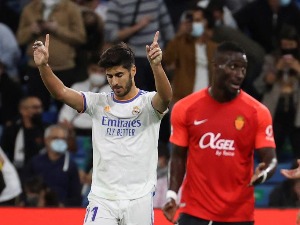 The team from Madrid easily and convincingly reached their fifth victory of the season, thanks to which they were left alone at the top of the table.

He took the lead in the third minute of the match with a goal by Karim Benzema, who scored another goal by the end of the game – in the 78th minute, after receiving the ball with his back.

Even more efficient was Marco Asensio, who scored a hat-trick against his former club from Mallorca.

The French striker could have finished the match with three goals next to his name on the scoreboard, but at the very beginning of the second half he tripped his keeper before he reached the ball that Rodrigo sent him on the ground from the right side, which was without problems placed in the network.

The only goal for the visiting team was scored by Lee in the 25th minute of the match, and the final 6: 1 was set by Isko six minutes before the start of the stoppage time.

The representative of Serbia, Luka Jović, entered the game instead of Benzema in the 80th minute of the game, and he could have entered the list of scorers because he effectively shot from the volley in the 89th minute, but the goalkeeper defended the guests. Jovic hit the crossbar shortly afterwards, but only after he committed a foul.

Real remained the leader of the championship with 16 points won, while Mallorca is in the middle of the table with two wins, two defeats and two draws.

In the second game of the sixth round of the Spanish championship, which started at the same time, Villarreal was also convincing against Elche – 4: 1.

The Sevilla footballers are earlier today beat Valencia 3-1 at home in the derby of the sixth round of the Spanish La Liga, while Espanyol defeated Alaves 1: 0 and left him at the back of the table.