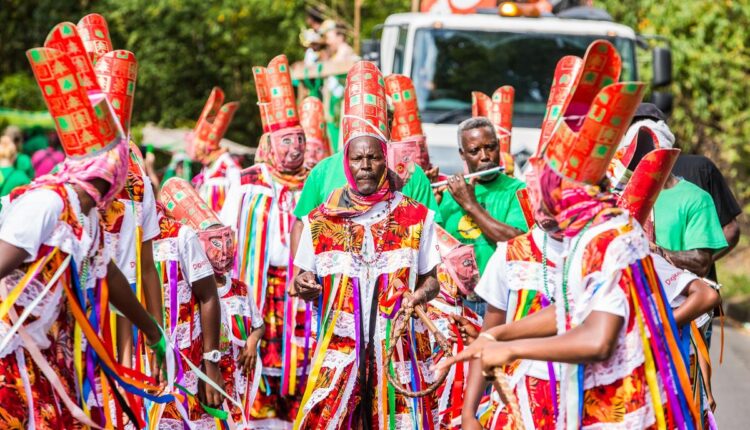 At just over 17km long and 11km wide, and tucked just south of Antigua and Barbuda, Montserrat is one of the Caribbean’s lesser-known islands. It has all the usual draws you’d expect from a tropical island – unspoilt beaches, thriving coral reefs, rainforest-covered hills – but what may surprise visitors the most is its rich Afro-Irish heritage, which can be seen and felt all over the country.

You’ll find villages with names such as Cork Hill, St Patrick’s and Delvins, meet people with Irish surnames including O’Garro, Allen and Sweeney, and you’ll even receive a shamrock-shaped passport stamp when you pass through security. It should come as no surprise, then, that Montserrat is the only country outside of Ireland that celebrates St Patrick’s Day as a national holiday. Here’s what to expect from the Emerald Isle of the Caribbean’s St Patrick’s celebrations…

Why is St Patrick’s Day celebrated in Montserrat?

To understand this, we need to go as far back at 1768, when indentured servants from Ireland fled persecution in St Kitts and settled in Montserrat, some going on to become wealthy plantation owners using slave labour. On 17 March 1768, African slaves planned an uprising, choosing St Patrick’s Day as most of the slave masters would be drunk and distracted by the holiday.

However, the plan was discovered and suspected. Tragically, nine people were hung for their role in the revolt and many more were imprisoned. The St Patrick’s Day celebration is therefore two-fold, as it commemorates the 1768 attempted revolt, while also recognizing the island’s Irish heritage.

How does it differ to Ireland’s celebrations?

Unlike in Ireland, in true Caribbean fashion, Montserrat’s version is celebrated for ten consecutive days, from 7 – 17 March. The first day starts at Cudjoe Head – a village named after the person who led the revolt – with a solemn torch lighting ceremony at a silk-cotton tree.

The next ten days see the island abuzz with festivity, outdoor activities and colour. All guest rooms and villas are filled with visitors from neighboring islands and countries the world over. There’s something for everyone, from art exhibitions, lectures and an African-wear fashion show to coastal tours, drag races, fun hikes and a five-kilometer road race called the Freedom Run.

There are also open air concerts with appropriately themed names such as Leprechaun’s Revenge, Emerald City Fest and Gold Rush, featuring top soca and reggae artists from the Caribbean.

The main day of celebration, on March 17, starts early. The parade dominates the streets featuring revellers dressed in colorful costumes and men wearing kilts in Montserrat’s traditional green and orange madras colours, African and colonial wear, with iron bands and drummers setting the beat. Masquerade dancers are hauntingly hypnotic in their red masks and colorful costumes with ornate mirrors and ribbons, as they pay homage to their ancestors.

Drums and fifes (similar to a recorder) accompany dance performances such as the heel and toe polka, which is influenced by both the island’s African and Irish heritage. Sweet Caribbean music can be heard everywhere across the island and food fairs fill the air with the aromas of barbecued chicken, goat water and other traditional delicacies, which can be washed down with a rum punch, the island’s exotic and potent bush rum, or, of course, a cold Guinness.

What else is there to do in Montserrat?

heaps! With a diversity of travel experiences including beautiful beaches and a rich cultural heritage, you’ll be spoiled for choice when choosing how to spend your time.

For an archeological fix, visit Soldier Ghaut to admire the petroglyphs engraved on a volcanic rock. They were only discovered in 2016 and are thought to have been carved by Amerindians some 1,000 to 1,500 years ago.

Nature lovers should head to the middle of the island where several marked hiking trails weave through the Center Hills, the island’s largest forested area. The two-kilometre Oriole Walkway Trail, for example, takes you through thick foliage to the top of the over 400m-high Lawyers Mountain with its sweeping views of the Silver Hills and Caribbean Sea. Keep your eyes peeled for the national bird, the Montserrat oriole after which the trail is named.

The peak of Jack Boy Hill to the east makes for a perfect finale. Enjoy a picnic while looking out over to the Soufrière Hills volcano and the surrounding islands. Not the St Patrick’s Day celebration you were expecting, is it?

RTS :: Lajović within the quarterfinals of Kitzbil