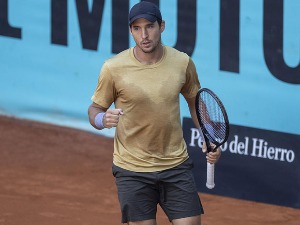 RTS :: Lajović within the quarterfinals of Kitzbil

The second duel between the Serbian and Russian tennis players lasted 91 minutes, and Lajović recorded his second victory over the 37th player on the ATP list.

The first set saw a great fight, and both tennis players certainly won games on their serves.

Lajović had two break points in the sixth game, which he did not use, but that’s why he did when it was most needed – for 7:5 and 1:0 in the sets.

In the second set, Lajović reached a break in the eighth game, took a 5:3 lead, and then sealed the victory with his serve.

In the quarterfinals, Lajović will play against the Austrian tennis player Filip Misolić, who is 205th on the ATP list, and who defeated the Spaniard Pablo Andujar-Alba 6:4, 6:0 in the round of 16.

The ATP tournament in Kitzbühel is played on clay for a prize fund of 597,900 euros.