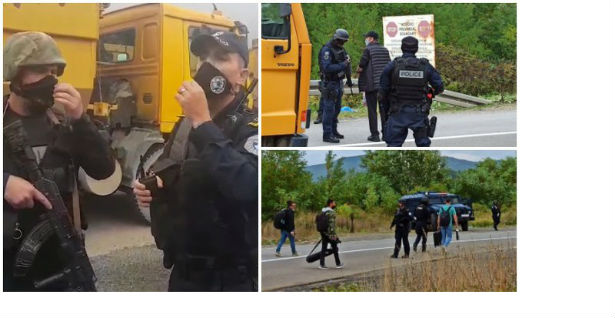 Unprecedented survival of Serbs in Kosovo and Metohija! Scenes from the scene!

HELICOPTERS OVERFLOW JARINJE: Unprecedented survival of Serbs in Kosovo and Metohija! Scenes from the scene!

According to the “Novosti” reporter from the scene, KFOR helicopters are in charge of Jarinje.

As of this morning, members of the Rosu special unit have been searching citizens who walked to central Serbia at the Jarinje crossing, because they cannot cross otherwise.

The crossing was blocked in both directions, and dissatisfied Serbs from the north of Kosovo and Metohija gathered in Jarinje to protest against the decision of the Pristina authorities to introduce reciprocal measures towards Serbia and the order that all vehicles with Serbian license plates enter the so-called Kosovo must put trial Kosovo plates.

The so-called police. Yesterday, Kosovo installed several prefabricated containers at the crossings for that purpose, and since this morning, the crossings Brnjak and Jarinje have been occupied by members of the special police brigade Rosu, who according to information from the field are located throughout the north of Kosovo and Metohija.