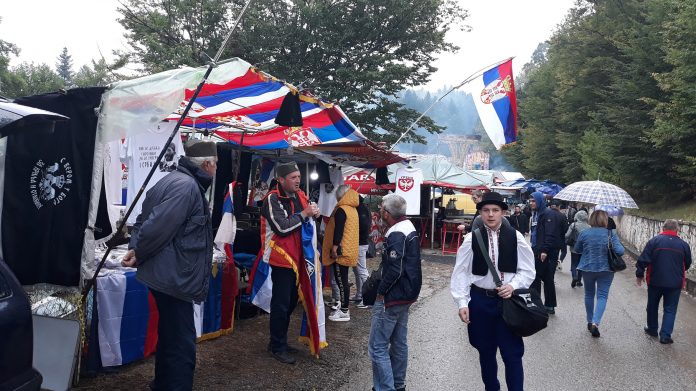 Love for the mother’s breast: Flags as a signpost

This year, the rain did not interfere with the gathering on Ozren, in the gate of the monastery of St. Nicholas, on the occasion of the Great Union Assembly. The gathering, according to the tradition on Ozren, the holy land of Nemanjić, begins on the eve of the Assumption of the Blessed Virgin Mary, and then the people of Ozren come from all over the world, as well as our people from this part of Republika Srpska and its surroundings.

This time, they camped on the meadows around the monastery, despite the rain and cool weather, they smelled roasting and barbecue, and the songs of folk, originals and modern rhythms to the taste of the younger generation resonated from many sides. Large tents received sour guests, they sang and played, ate and drank, and then played. 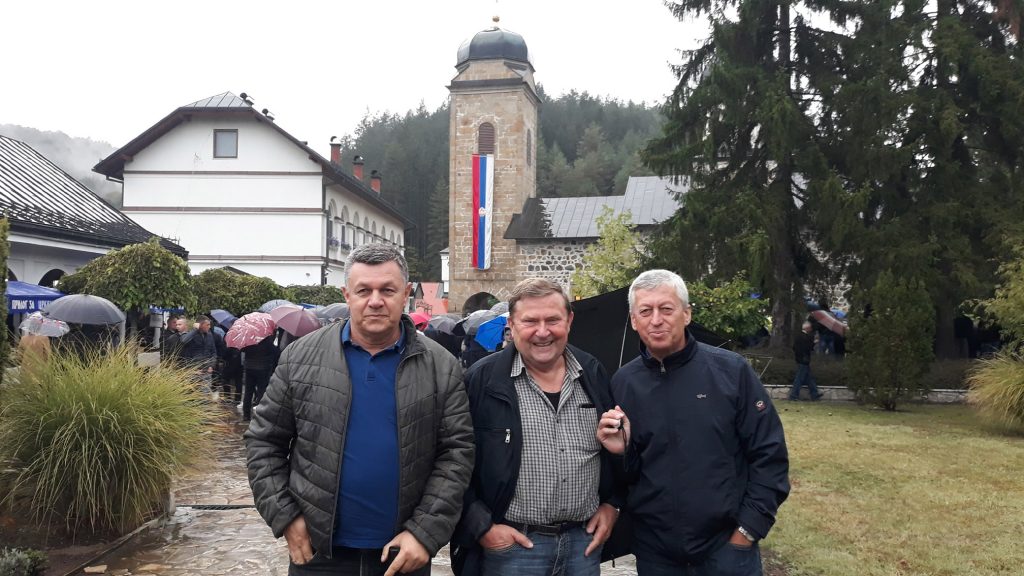 Zeljko Milicic, Nedeljko Jacimovic and Dusko Ivanovic in front of the monastery

A holiday of love

Along the main road leading from the monastery, T-shirts with national heroes, souvenirs, toys, jewelry were sold, as well as home-made products – caricatures, woodcut characters, glass bottles painted with saints and heroes. And while most visitors used the tents to refresh themselves with food and drink and warm up at least a little from the unusually cold weather for this time of year, there were those who replaced the fair atmosphere by going to an inn, where they also ate and drank, and original songs. ” kept the main word ”. 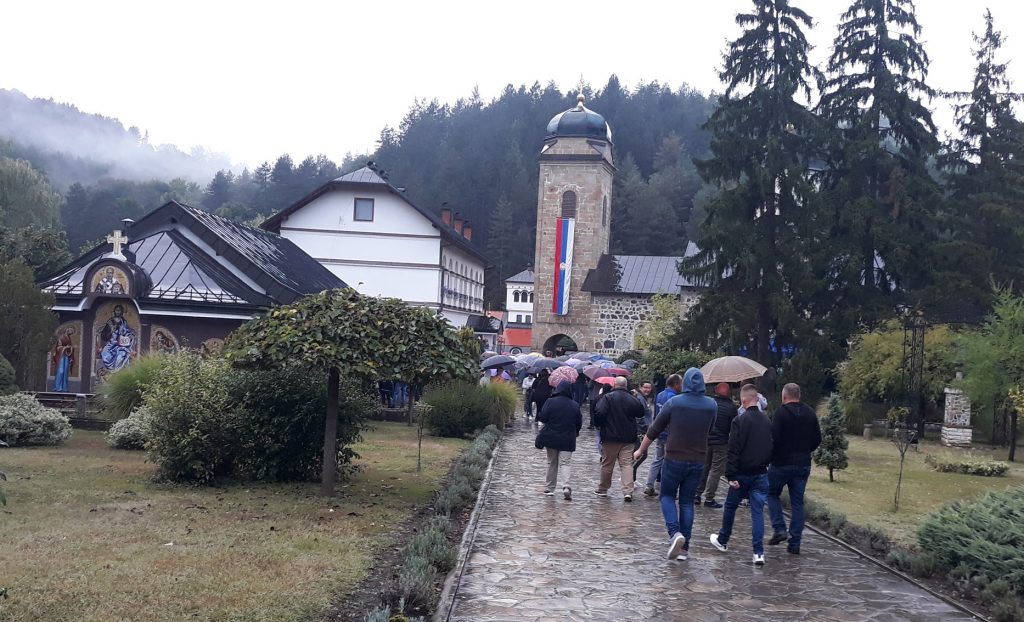 Pilgrimage: A large number of believers attended the service

An appropriate program was performed in the monastery gate, in which folklorists, musicians, poets participated, and each point was rewarded with applause by numerous visitors.

– The Assumption of the Blessed Virgin Mary is a holiday of joy, love, beauty, peace and justice of God – said Predrag Jović from Petrov, who together with the priest Tadija from Teslić organized the program. He also pointed out that the gathering of the people in this non-monastic shrine is “a confirmation that we are celebrating a holiday that invites us to gather.” 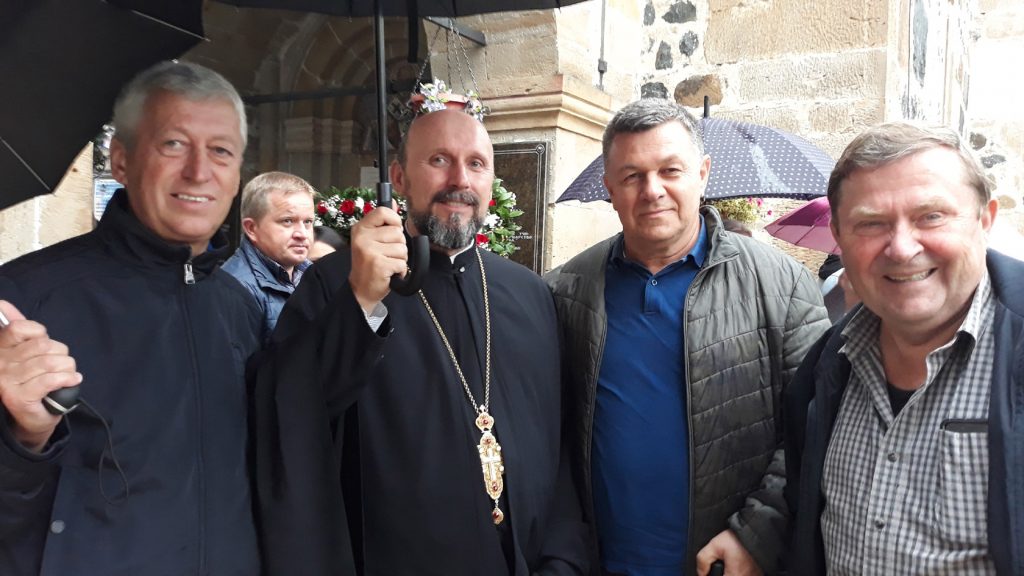 In the folklore part, the players of KUD “Milovan Gajić” from Petrovo performed the Ozren original games and the Children’s Choir “Javor” from Doboj, which operates at the temple of the Holy Apostles Peter and Paul.

Lazar Blagojević accompanied the performance of the songs “Tamo daleko”, “Kosovski božuri”, “Pukni zoro”, “Mi smo dece neba” with the accordion… The program was enriched with verses by Rada Janjušić and Vojislav Ilić.

Thus, with a quality program in the gate of the monastery of St. Nicholas on Ozren, the arrival of the great feast of the Assumption of the Most Holy Mother of God was announced, which many celebrate for three days. 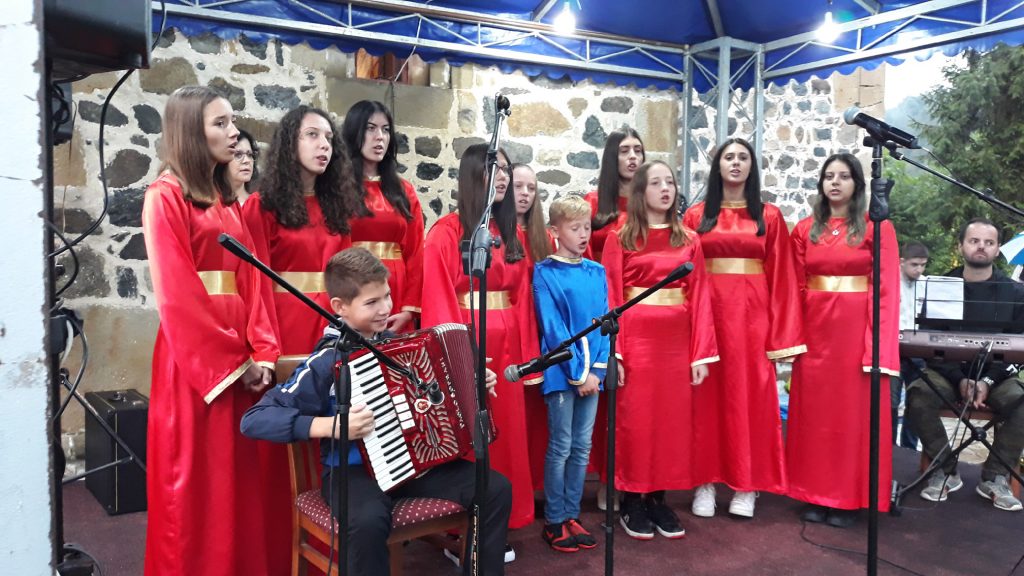 Among the visitors to the assembly were our people from Serbia, Croatia, Slovenia, as well as abroad – Germany, Austria, Switzerland, because every year for the Assumption of the Blessed Virgin Mary comes to Ozren, regardless of whether it was summer heat or rain and cold suitable for early autumn. No one complains about mud, cold and food and drink prices because this is celebrated once a year. That is how Nedeljko Jacimovic from Canada, Dusko Ivanovic from Switzerland and Zeljko Milicic, all from the village of Lijesce in the municipality of Brod in the north of Republika Srpska, arrived in Ozren.

The meeting of the people of Liješće with the archpriest-staurophore Miro Đukarić, who was the parish priest in Liješće and took part in the reconstruction of the war-torn church of the Holy Trinity, was especially touching. 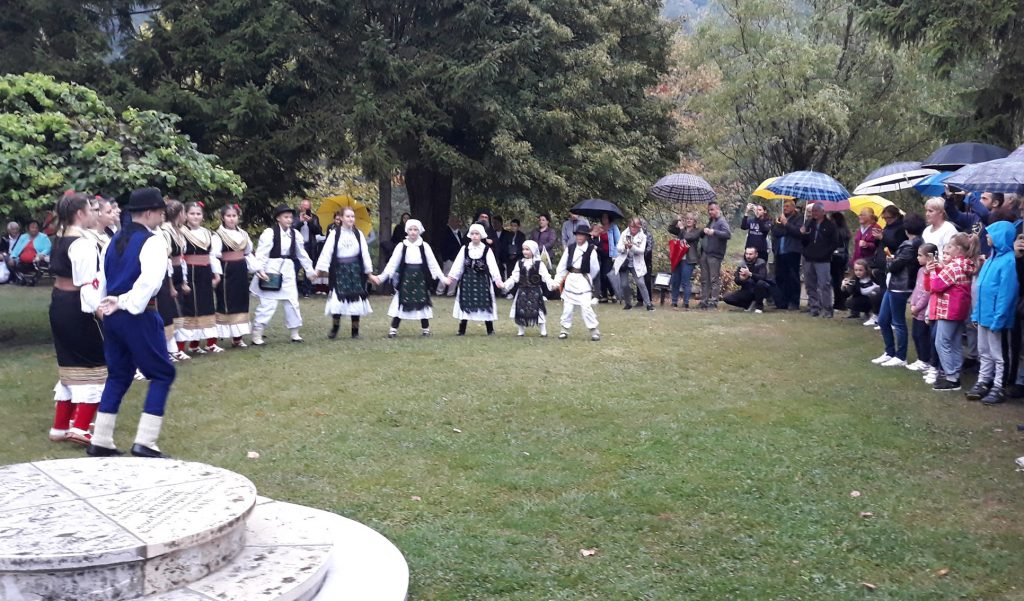 After the parish in Liješće, Đukarić continued his pastoral work in Banja Vrućica near Teslić in the church of the Ascension of the Lord and gladly remembered the time spent in the Brod municipality.

The gathering in honor of the Feast of the Assumption continued on Sunday, and everything took place in the sign of worship and prayer in the church of St. Nicholas, which was attended by several priests and monks from other monasteries and churches in this part of Republika Srpska. Only after the third day did the guests slowly begin to disperse, and most greeted each other with: “Next year in the same place!” 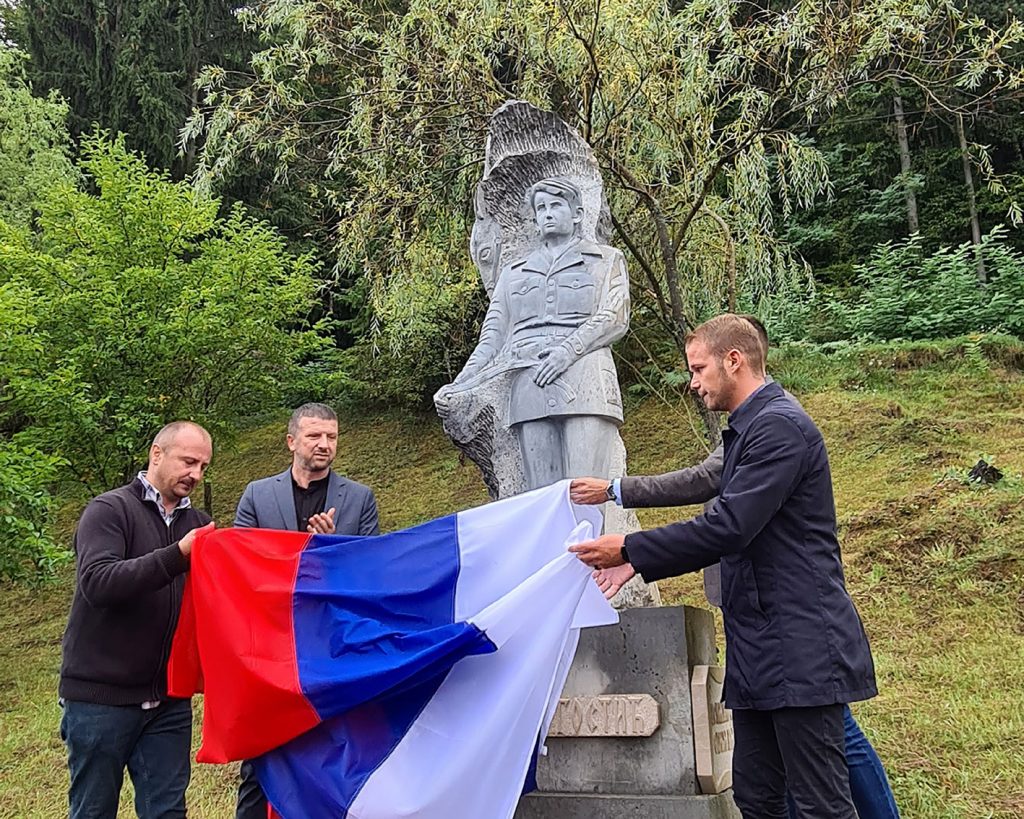 Monument to the youngest fighter

The memorial statue of Spomenko Gostić, the youngest fighter of the Army of Republika Srpska who died at the age of 14 in Jovići near Maglaj, was solemnly unveiled and consecrated on the feast of the Assumption of the Blessed Virgin Mary in the gate of the monastery of St. Nicholas in Petrovo.

The monument was consecrated by His Eminence Bishop Fotija of Zvornik and Tuzla, who said that Gostić was a martyr of our time, together with another 30,000 Serbs who suffered for the Republika Srpska.

– Spomenko was among the youngest. An example of an honest young man who loves his country and who suffered for it and its ideals – the bishop pointed out.

The memorial statue of Spomenko Gostić was unveiled by the initiator and organizer of the project, Mile Savić, the mayor of Petrovo, Ozren Petković, the mayor of Banja Luka, Draško Stanivuković, and the councilor in the Bijeljina City Assembly, Miloš Stanišić. 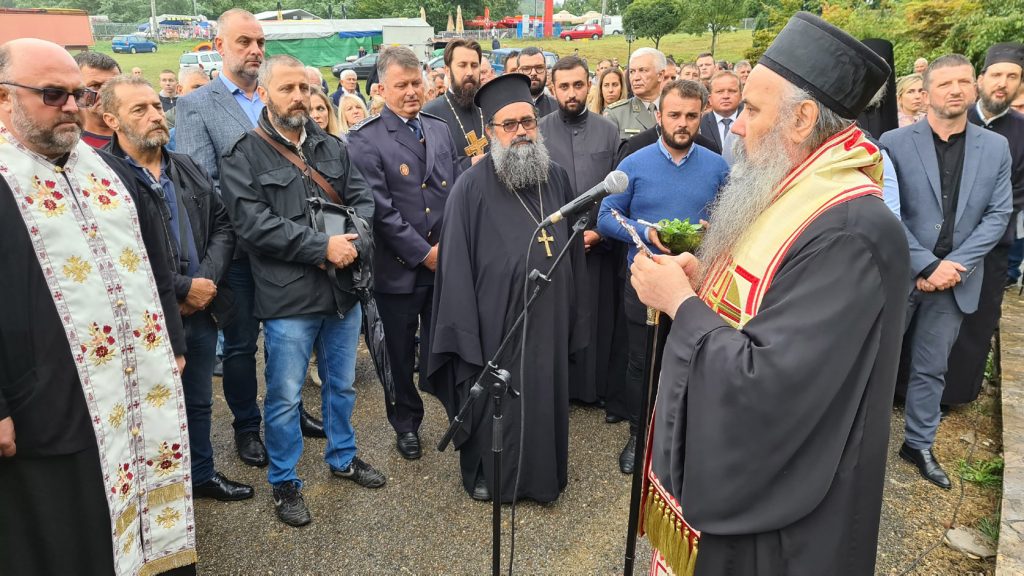 The tradition has lasted for centuries

On the occasion of the feast of the Assumption of the Blessed Virgin Mary, His Eminence Bishop Fotija of Zvornik and Tuzla, within the traditional church-folk choir, served the Holy Hierarch’s Liturgy in the monastery of St. Nicholas. During the sermon, Bishop Fotija said that he was satisfied that the tradition of assembly and conciliarity at this shrine had been maintained for centuries – during peace, war and illness.

The Holy Hierarch’s Liturgy, along with Bishop Photius, was co-served by Abbot Gabriel with the clergy.

According to folklore, the monastery on Ozren is the endowment of King Dragutin Nemanjić, who ruled this area at the end of the 13th and the beginning of the 14th century.