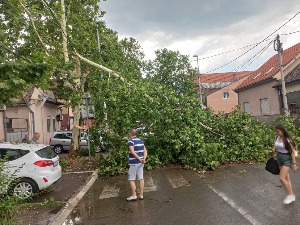 Storms throughout Serbia – torrents in Novi Unhappy, cloudbursts in Belgrade, the town on Kopaonik and Zlatibor

A strong storm, followed by rain and thunder, hit Belgrade in the afternoon.

Due to the amount of precipitation in a short time, some city roads are under water.

In Zemun, in Ugrinovačka Street, traffic was blocked because a tree fell on the road due to the storm.

In the storm, which hit Novi Sad at around 12 o’clock, a strong stormy wind broke a tree in Bate Brkića Street, which destroyed one car, but no one was injured, reports the RTS correspondent.

The branch of the tree also damaged the fence of the “Isidora Sekulić” Gymnasium. The downpour with thunder lasted for half an hour, making traffic difficult in Petrovaradin, Sremski Karlovci, Bukovac.

City Green teams immediately went out on the field.

“We had close to 20 interventions in the city, there were broken branches and several trees collapsed in the wind. Our teams are on the ground. There were problems in Novo Naselje, Sremska Kamenica, Petrovaradin, Grbavica … There were no injured people, but material damage was caused to several cars, “Jelena Prica, a spokeswoman for Gradski zelenil, told RTS.

In some parts of the city, torrents were created on the streets, because the sewage system could not receive that much water.

Both Kopaonik and Zlatibor were hit by a strong storm, followed by hail.

A short downpour hit the Užice region in the afternoon.

The small town fell for a few minutes in Bajina Basta and the upper part of the Uzice village of Buar.

Earlier today, RHMZ issued a warning of heavy showers with hail, stormy wind and rainfall of more than 20 millimeters in a short time, in Bačka, Srem, northern Banat, as well as in the hilly and mountainous areas of southwestern, southern and southeastern Serbia in the afternoon and in the evening.