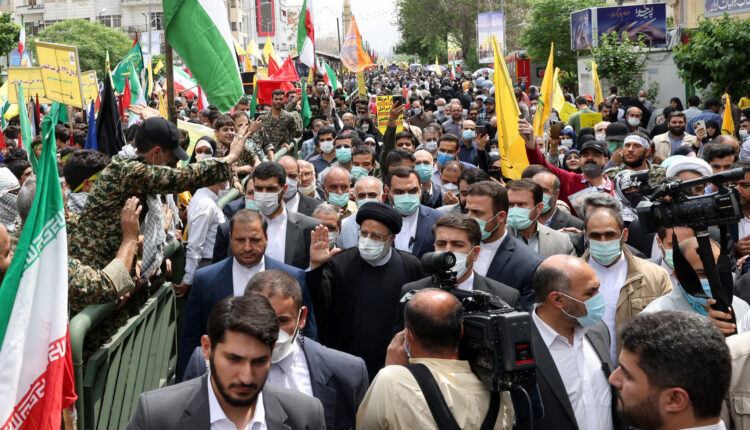 Iran’s Supreme Leader Ayatollah Ali Khamenei has called on the Palestinian people to continue their fight against Israeli security forces and condemned the policy of normalizing relations with Israel.


“Polls show that almost 70% of the Palestinians in the 1948 and 1967 lands and in the surrounding camps encourage the Palestinian leaders to carry out attacks on the Zionist regime. This is an important phenomenon because it signifies the complete preparedness of the Palestinians to confront the usurping regime and it provides the mujahid organizations with the freedom to take military action whenever they deem necessary,” he said while addressing the Iranian people on the occasion of the Quds Day celebrations in Tehran on April 29.

He also condemned the policy of a normalization of relations with Israel, describing it as “treason”. “Some Arab governments have asked the US to accelerate the matter of solving the Palestinian issue. If they mean that before the US leaves the region it should remove any obstacle standing in the way of the Zionist regime, then, first of all, they have behaved treacherously and have brought disgrace to the Arab world” the Iranian leader said.

Khamenei added that “no scheme or plan about Palestine is implementable in the absence of Palestine or against the consent of its owners, the Palestinians”.

In 1979, the founder of the Islamic Republic of Iran, Ayatollah Ruhollah Khomeini, declared the last Friday of Ramadan as “International Quds Day” in support of the Palestinian people’s fight against Israel. Tens of thousands of Iranians attended nationwide annual rallies on April 29, burning Israeli flags and chanting anti-Israeli slogans. The rallies were canceled in 2020 and 2021 because of the Covid-19 pandemic.

For years, Iran and Israel have been engaged in a proxy conflict, which started after the 1979 Islamic Revolution in Iran. Tehran has reportedly provided military and financial assistance to Palestinian groups such as Hamas and Islamic Jihad, which have fought against Israel in recent years. Nathan Sales, a counterterrorism expert at the US State Department, said in November 2018 that Tehran funds Hamas and other Palestinian militant groups to tune $100 million a year.

Israeli-Palestinian tensions have soared after recent deadly attacks in Israel and subsequent casualties in Palestine during Israeli raids.

Addressing ambassadors from Muslim countries and representatives in Tehran at a gathering on April 28, Iranian President Ebrahim Raisi said that “the Zionist usurper regime is still a serious threat to the Islamic Ummah. Oppressed Palestine is the key to the unity of the Islamic Ummah”.

The president said that Israel’s “sinister and expansionist intentions” threaten the entire region and the identity of the Islamic world in all regional countries, adding that “countries that try to normalize their relations with the bloodthirsty Zionist regime are like someone who is growing a snake up his sleeve”.

The head of the Intelligence Organization of the Islamic Revolution Guards Corps (IRGC), Hossein Taeb, said in a statement on April 29 that “the weak Zionist regime is nearing the precipice of its decline and is no longer able to defend itself and ensure its security”.


“Dissenting voices are heard from the Occupied Territories and we are aware the Zionist authorities have lost sleep over the drawn swords of the resistance and also collapse from within,” he added.


The Iranian government criticizes such Arab states as the UAE, Bahrain, Sudan and Morocco, which have called for normalization of ties with Israel, over the past two years.

On April 21, Iran warned Israel that Tehran had intelligence on the locations of nuclear weapons sites, and that the country’s Armed Forces will strike the sensitive targets in the occupied territories in the event of any aggression against the Islamic Republic.

Earlier, on April 18, the Iranian president warned Israel that if the country made the “smallest move against the Iranian nation, be sure that following this move the target of our armed forces will be the center of the Zionist regime”.

He noted that despite the fact that Israel is normalizing ties with a number of countries in the region, even the slightest move would be detected by Iranian intelligence.

Storms throughout Serbia – torrents in Novi Unhappy, cloudbursts in Belgrade, the town on Kopaonik and Zlatibor