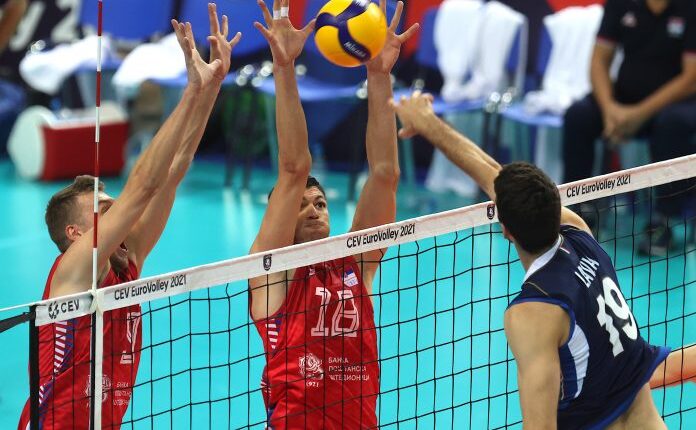 Serbia defeated by the mighty Italy! Nothing from defending gold on the European Championships, with host Poland for bronze!

During most of the match, it was mostly played point for point. Serbia played well, but the Italians took more risks, made mistakes, but they managed to burden the reception of Serbia, be better at the end of the sets and in the end deservedly celebrate. Since the start of the championship, the Italians have not lost a single match, and they allowed their rivals to win only 3 sets against them, including the one that Serbia won in this duel. Thus, the Italians will play in the grand final against Slovenia, which beat host Poland in the first semifinal duel.

That is how Serbia will play against Poland for the bronze medal.

From the start of the match, Serbia played great and quickly took the lead 5: 3, and then 8: 4. However, the Italians make a series of 5: 0 and reverse the result.

From that moment on, it was played mostly point for point. No team managed to “detach” and reach more than 2 points of advantage. The Italians led 19:17, and Atanasijević started the game of Serbia. Along with him, Podrascanin is also excellent, who stops the Italian attack with a block and confirms the third tied point of our team.

In the end, the difference was played, and after a great fight, the Italians won the first set 29:27.

In the continuation, Serbia took the lead, similar to the beginning of the match. However, the service of Gianelli caused our receivers a lot of problems every time, so the series of 5: 0 completely returned the Italians to the match for the lead of 12: 9.

A quick response from Serbia followed, which, after Petrić’s serve and the 3-0 series, equalized again at 12:12.

The equal final was entered again, both teams were equal, but at the end of the set, the Italians “added gas” and won the second set with 25:22, for 2: 0 in the sets.

A similar picture was seen below. Serbia played well, managed to reach a two-point advantage, but the Italians managed to maintain the connection and respond to every attempt by Serbia to break away and reach a more convincing advantage.

The Italians played on the verge of a mistake, which they made to a large extent, but they led 2: 0 and were much relieved.

Italy played in a trance in the fourth set and tied 5 points. Gianelli scored 2 aces, Micheleto won two points and with that, Talia won a point with a block.

Serbia played a bit better, but the Italians burdened the reception of Serbia with the service and quickly reached 17:10.

Until the end, the Italians maintained the advantage and after 25:18, they came to victory and placement in the grand final.

10:17 – The Italians have a convincing advantage, Serbia is once again chasing a big advantage.

9:14 – Micheli makes a mistake after the serve.

6:12 – Simone Gianelli throws the ball for a convincing advantage of Italy.

4:9 – After a period of somewhat better game of Serbia, the Italians are regaining the advantage.

0:5 – Italia plays like in a trance in the 4th set and leads convincingly. Gianelli scored 2 aces, Micheleto won two points and a block.

23:23 – Again, Serbia stopped at the end of the set and allowed the Italians a mini series of 2 points.

22:21 – The Italians play on the edge of a mistake, and they make a lot of mistakes, but they lead. It is uncertain in the third set as well.

19:19 – Danijela Lavija blocks Atanasijević. It is a draw again.

18:16 – Four points of Atanasijević in this set, a total of 8. Serbia has a two-point advantage at the end of the third set.

16:15 – Gianelli is cooking and bringing his team closer to Serbia again.

12:10 – Great point of Serbia! Atanasijević serves strongly, and after a bad reception by the Italian, Petrić strongly spiked the ball into the opponent’s field. Then Podrascanin brings Serbia leadership again. The Italian coach is looking for a time-out.

9:7 – After the period of the game in which they played mostly point for point, Serbia leads. The selector Slobodan Kovač’s team is struggling a lot to get to the points, but they finally get one longer exchange and come to the advantage.

2:2 – Egal from the start of the third set. Both teams play fairly evenly, but the Italians are better in the end of the sets and have a convincing advantage.

22:25 – The Italians reach the point with the service of Michelet and won the second set.

21:23 – In the finish of the set, the Italians have a two-point advantage again. Serbian coach Slobodan Kovac is asking for a time-out.

18:18 – It is a draw again, there is a big fight for every point, and no team manages to reach a significant advantage.

14:16 – A difficult ball for Uroš Kovačević, a triple block awaited him and blocked him.

9:11 – The block of Italians who are making a new mini series and leading has become operational. Serbian coach Slobodan Kovac is asking for a time-out.

9:9 – There is a big fight in the second set as well. Serbia took the lead again, Italy returned. Similar to the beginning of the match, the game is played point for point.

5:5 – Serbia also opens this set well. The service works as well as the block, but the Italians keep the connection. After the mistakes of Serbia, it is a draw.

26:26 – Micheleto litters through the block of Serbia, and then Galasi makes a mistake.

25:25 – Uroš Kovačević is blocked and Italy reaches the set ball. Then, Luburić brings a new equalizer.

24:24 – Kovačević blocked the Italians, but the ball went out, the difference is played.

24:23 – The Italians equalized, but Pinali made a new service error and Serbia leads.

23:21 – Italians are wrong, Serbia has a two-point advantage.

20:19 – Atanasijević starts the game of Serbia. Along with him, Podraščanin is also excellent, stopping the Italian attack with a block and confirming the third tied point of our team.

17:19 – The Italians again come to a two-point advantage. One of the longest points in the match was seen, with a lot of good defenses. Italians lead.

17:17 – Srećko Lisinac makes the first service error, it is a draw again.

10:9 – Serbia breaks the series of Italians with two points.

8:9 – The Italians tie the fifth point and reverse the result.

8:8 – Dražen Luburić was stopped after a great block. The Italians tie four points. Slobodan Kovac is looking for a time-out.

8:4 – Srećko Lisinac serves excellently and wins a point from the serve.

The current European champion will play 12 times in the semifinals of the European Championship since 1995, and Serbian volleyball players did not participate in the fights for medals only in 2009 and 2015.

With tonight’s rival in the fight for the finals in Katowice, Serbia has played 17 times at the European Championships so far and recorded 10 victories. 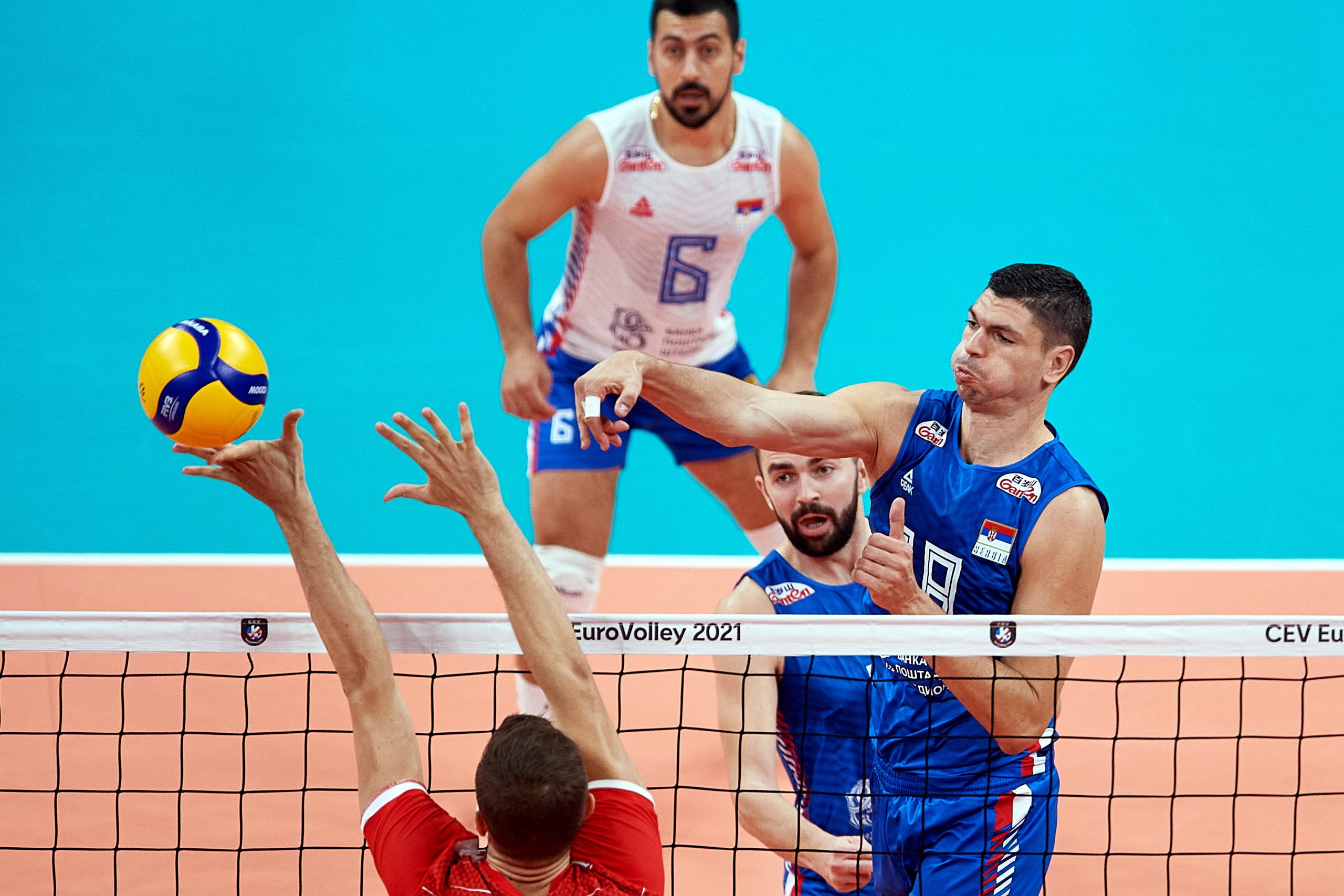 Coach Slobodan Kovac hopes for a good result and points out that both teams have a motive in tonight’s match.

– They are comparing this generation with the team of their phenomenon, they are looking for a way to return to winning ways. But it doesn’t matter who is on the other side of the field. Italians have a motive, but we also have a motive. Why not be the only team in Europe with Russia and Italy that managed to be the champion twice in a row – said Kovac.

The last duel between Serbia and Italy was exactly 10 years ago, on this day in Vienna, in the final of the European Championship 2011, when Serbia won the second European title.

– We think about ourselves, but we normally study the opponent, we will try to find their flaws. They have many virtues, but they also have flaws. I think that we will be ready, that we will read Italy well and achieve a good result – said Kovac.

The match between Serbia and Italy is the second semifinal, while in the first, Poland and Slovenia will meet at 5.30 pm.

The artwork of ‘sluggish’: discovering the coastal secret of Paraty in southern Brazil