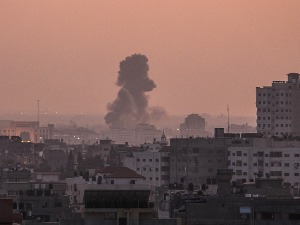 RTS :: Sirens once more within the Gaza Strip, Israel carried out new airstrikes

“The plane recently hit another rocket position of the Palestinian terrorist organization Islamic Jihad in the Gaza Strip,” the army said.

The Times of Israel reported that sirens were heard again this morning in Sderot and other towns near the Gaza Strip.

According to those reports, the “Iron Dome” air defense system intercepted several missiles.

So far, there is no information about the damage caused or the injured in the latest wave of rocket fire.

The Israeli military said it arrested 20 suspects overnight in raids across the West Bank, including 19 Palestinians linked to the Islamic Jihad terror group.

The suspects were transferred to Israeli security services for questioning, the military said.

There were no injuries among the Israeli forces that carried out the raids.

At least 10 people were killed and 44 wounded last night when Israeli forces bombed the Gaza Strip, officials there said.

Israel claims that the targets of the Palestinian Islamic Jihad movement, in which a senior commander was liquidated, were targeted.

Islamic Jihad claimed responsibility for yesterday’s rocket attack on Israel and announced that more than 100 rockets were fired at Tel Aviv and its surroundings in retaliation.

Cairo wants to mediate between the two sides.