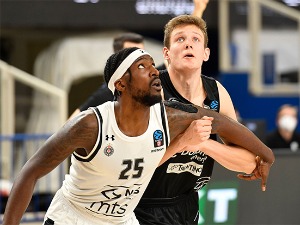 Partizan is unhealthy in Trent, towards Metropolitans for the quarterfinals of the Eurocup

Another bad match this season was played by Partizan basketball players, so the defeat by Trent could not be missed – 69:54.

True, the black and whites played again without three tall players (Veličković, Mozli, Mika), but that cannot and must not be an excuse for bad basketball during most of the match in Italy.

Fortunately, Trento did not use all the weaknesses of Sasa Filipovski’s team, so he won the game less convincingly than Partizan celebrated in the first match in Belgrade (71:43).

That fact is the only good thing that the black and whites did in Trent, so their placement in the quarterfinals of the Eurocup will depend on the game of the last, sixth round, in which Partizan welcomes the Metropolitans in Ljubljana.

The black and whites started the match well in Italy, after the first quarter they had the advantage (19:15), and then inexplicably “pulled the trigger”.

Trento did not use the first empty minutes (five and a half minutes without points at the start of the second section), but in the third quarter, the Italian team reached a double-digit advantage with a series of 10: 3.

At the entrance in the last 10 minutes, Lela Molina’s team had an 18-point advantage, but the black and whites somehow managed to stay in the game in the last section and in the end reached, unbelievably sounds, a bearable defeat.

Jacquer Williams was the most efficient in the winning team with 16 points, Gary Brown added 13, while Rashon Thomas was the best in the Partizan team with 17 points.

The locomotive convincingly defeated the Metropolitans in Paris and completely complicated the situation in Group F.

Before the last round, Metropolitans and Trento have a score of 3-2, while Lokomotiva and Partizan have 2-3, so it is not excluded that all four teams will finish the competition with a half score of 3-3, and in that case, the participants in the quarterfinals will decide the basket difference.

Partizan will play against Metropolitans as the host in Ljubljana, due to Euroleague rules regarding the coronavirus pandemic.

What did the examination of our ancestor’s fossils carry?

With music on a visit around the globe