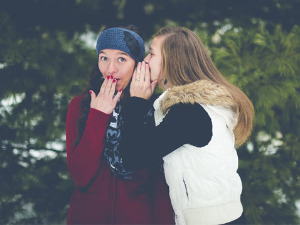 Not all gossip is sweet, however it helps us in our work and social life

When talking about gossiping, there is a stereotype that it is a characteristic of women. However, research shows that the popular myth that men don’t gossip is not true and that both sexes are equally capable of gossiping.

Evolutionary psychologist Robin Dunbar even claims that language evolved to allow people to gossip. From its earliest form to the present day, gossip has been a way to convey socially useful information about who you can (and cannot) trust, who is a reliable source, and who is spouting nonsense.

This type of conversation promotes social cohesion and mitigates conflicts. During the Middle Ages, the word “gossip” was used for women who assisted during childbirth. Then, over time, it denoted a good acquaintance, a friend, and later “anyone who deals with familiar or empty stories.” Today, the term is used and interpreted in several ways, as a verb to gossip/gossip, a noun gossip/gossip or even to denote a specific person who deals with gossip – the gossiper.

There was no negative meaning attached to gossip until the time of the European witch hunts of the 16th to 18th centuries. Gossip was the catalyst for accusations of witchcraft and black magic. A medieval instrument of torture called the “bridle of reproach” was made to punish and prevent women from speaking. Thus began the negative reputation and stereotype of gossip as “women’s talk”.

Paradoxically, at the same time, gossip as a male form of conversation spread throughout the 17th and 18th centuries in English clubs. As an exclusive meeting place for the educated and wealthy, learned men and their students came here to display their wit and intellectual sharpness. This is where the myth was born that women gossip and men talk seriously.

Professor Waddington’s research into workplace gossip dispels the preconceived notion that gossip is trivial or dangerous female speech. In conversations with men about their experience with gossip at work, the professor adds, most started the sentence with, “I’m not one of those who gossip, but,” and then went on to talk at length about how they actually use gossip very strategically.

But that’s why numerous euphemisms for this type of information transfer, such as “casual conversation”, “talk after the meeting” or “hallway talk” have arisen. Men seem to be more comfortable using these terms. But when, for example, they come back from vacation, they won’t ask “is there any gossip?”, but “what happened?”. The intention behind the question is the same, but the latter softens the impression that it is actually gossip.

Gossip at work is especially seen as something unacceptable, but according to Dr Catherine Wattington, popular stereotypes about gossip overemphasize the negative aspects, but it can also be linked to empathy, sympathy and learning from the problems of others. Gossip is a way of expressing emotions, both positive and negative, a way of “letting off steam” and an emotional reaction to perceived social injustice.

There are also times when gossip is an expression of concern about unethical or unprofessional behavior – for example when there are “common knowledge” stories of sexual abuse, but no one is talking about them publicly. When the topic of gossip is about some negative aspects in the collective, it can be an early warning signal that should be paid attention to, not ignored or disregarded.

Of course, not all gossip is good. There are times when gossip can damage the reputation of people and organizations. Negative gossip is a form of bullying, which is harmful to people’s well-being. The decision to gossip – or not – is always an ethical issue.

Globally, the #MiTu movement has changed the perception of gossip, as well as the rise of a “speech culture” and the creation of a psychologically safe environment where one can tell the truth without fear of recrimination.

Whistleblowing is vital to uncovering misconduct or hidden threats and to maintaining an open society. The focus has now shifted from gossip as the problem itself, to gossip as a way to present the “problem behind the problem” – exposing structural problems that have been swept under the rug.

The pandemic has also highlighted the benefits of gossip. Almost overnight, the quarantine ended opportunities for casual conversations that are a form of gossip – conversations in the coffee line, and before or after meetings. As many people return to the office, they may realize how important these small moments of gossip are to social connections and collaboration, he concludes. Professor Wattington.

Putin plans to increase Russia’s financial sovereignty within the 2020s