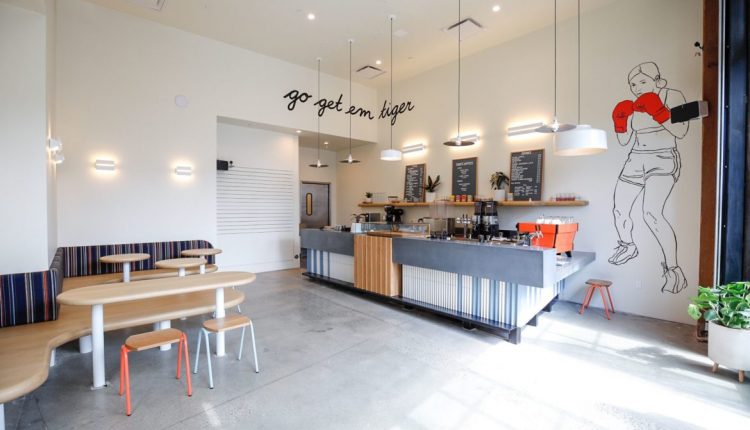 “Our goal is to be part of the structure of the Arts District.”

That’s the word from Kyle Glanville, co-founder and co-entrepreneur at Go Get Em Tiger, an independent brand of roaster retail cafe in Los Angeles. I speak to him today from GGET’s newest coffee shop, a 400 square foot space in the heart of LA’s vibrant Arts District. We’re just a few blocks from the place where Handsome Coffee (RIP) planted a specialty coffee flag back in 2011 in this neighborhood at 582 Mateo. (It’s a blue bottle now.)

The vibe here at Go Get Em feels industrial and hip – there’s a Shinola retail store next door – but with an approach to clean space and line drawings reminiscent of the company’s first LA cafe space on Larchmont. The two cafes are roughly six miles apart, but the aesthetic difference between the neighborhoods cannot be emphasized enough. There is also another new GGET in Highland Park, east of the Los Angeles River, in the same building as Highland Park Natural Wine. The brand plans to open several new cafes (plural) in the Los Angeles area in 2019 and 2020.

But here on E. 3rd the bar is equipped with GGET’s favorite La Marzocco PB in deep tiger orange and Mazzer mills. There is homemade almond milk, freshly rolled. A female boxer watches over the baristas with her fists raised. The simple line art stands out through her red gloves and draws attention to the corner where she is waiting. The art is reminiscent of a classic, knowingly retro pee-chee folder style that Glanville describes as an integral part of the brand. “We want characters who do something remarkable,” he tells me.

An in-house design team took care of the easy expansion and furnishing of the room. This is the first time GGET has done all of the design work itself – a sure sign that the company is growing. The heart of the industrial Sport is a floor-to-ceiling garage door with windows that let in light and are framed by reinforced steel girders. All retail coffee is displayed on floating shelves on a wall across from the bar. The pastel-colored packaging serves as both a tempting retail and cheerful, candy-colored decoration. A shelf of GGET shirts hangs in the window, and on the wall next to the bar are more shelves of the self-brewing retail and other loot. Like Larchmont, GGET Arts District has a long bar where customers can stand and order from anywhere. Outside there are a couple of two-peaks to soak up the sun and people watching the busy neighborhood.

The menu here is more compact than at the Los Feliz location of the brand, for example, where the focus is on food. “We want to focus on the hits,” says Glanville, “but we’re walking a dangerous line.” He wants to make sure that GGET remains a café in public instead of being perceived as a restaurant. “The food here should revolve around the attraction of coffee,” explains Glanville. That means you can get things like waffles, cereal, or a frittata here in the Arts District. It is food that wants to live with coffee.

This Arts District location opened in late 2018 and is just the latest iteration of growth for a part of Los Angeles that has become synonymous with generational change. In the past 15 years, this neighborhood has seen a renaissance, transforming from abandoned buildings to artist lofts to a more middle-class crowd with the money for luxury lofts and curated boutiques. But the undercurrent remains friendly and a little unconventional – there’s a reason Hollywood films so many New York scenes on these blocks – and the staff reflect the same vibe. While GGET is by no means the only cafe in the area (there are three other shops selling coffee in close proximity), GGET has already attracted regulars and is constantly busy.

“The most enjoyable experience is when you can be early in a neighborhood that comes into itself,” says Glanville, and you can see it before your eyes through the cafe’s windows in third place. The block is busy and naturally flows into part of the SCI-Arc campus, the Hauser & Wirth gallery, and a half-dozen boutiques and a dozen restaurants nearby. “The Arts District chews and spits coffee shops,” he laughs, which implies – but not this. Only time will tell, but a strong set of opening months looks good for the future of Go Get Em in the Arts District. They seem ready to sink their claws in and stay for the long term.

Valorie Clark (@TheValorieClark) is a freelance journalist based in Los Angeles. Read more about Valorie Clark on Sprudge.