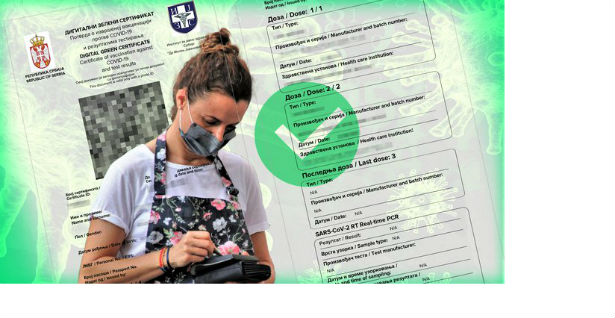 For those who have not been vaccinated, the only option to get a covid pass is to confirm that they have had a crown, a negative antigen or PCR test, or a test that confirms that they have antibodies.

For those who have not been vaccinated, the only option to get a covid pass is to confirm that they have had a crown, a negative antigen or PCR test, or a test that confirms that they have antibodies.

This has given many citizens a headache because testing is only recognized from state and not private laboratories.

The decision-makers claim that in that way, better control is provided and possible misuse of covid certificates is prevented, while private laboratories say that it is “harassment of citizens for their money”.

Gabrijela Čonkić found herself in a bureaucratic whirlpool and cannot get a kovid pass. She was vaccinated seven months ago with both doses. Just as she was about to receive a booster dose, she became infected with the corona virus. In order not to wait for hours in front of the Kovid ambulance with the temperature, she was tested by a private person and treated in a private health center.

When she recently tried to get an electronic kovid certificate through eGovernment, she found out that it was not in the records. Patients tested and treated in private institutions cannot receive a covid pass.

She was preparing to receive a booster dose, but her daughter received the crown, so the doctor advised her to postpone the vaccination.

– I called the number that is on the site ‘kovid-19’ and they told me that the only solution now is to do a test for the presence of antibodies in one of the state laboratories that do that – Gabriela told Euronews Serbia.

Private individuals cannot because of the fear of abuse
State Secretary of the Ministry of Health Mirsad Đerlek says that the Government of Serbia has decided to recognize the results of the antigen, PCR test and antibody test only from state laboratories, in order to prevent abuse.

He states that there are enough state laboratories, that they are electronically connected and can be monitored well.

– This was done in order to avoid the possibility of abuse. We had a few months ago that two people were detained for attempted forgery, because they issued a certificate that someone was vaccinated, but he was not. This was discovered because there is good electronic control of institutions in the system. In order to avoid malversations and to be able to monitor them better, it was decided that the analyzes can be done only in state laboratories – said Đerlek.

He states that this is the case at the moment, but that this does not mean that the Regulation will not be changed and that private laboratories will not be included.

– There are people who are prone to inappropriate behavior and forgeries and that worries us. That is why there was a delay with kovid passes, which can be easily faxed – he said.

He points out that kovid passes can be discussed for those who have been treated for kovid in private practice. That the difference is when someone takes a test and is treated, that perhaps in the first place they did not think about what does not mean that the Regulation will not be supplemented.

– The test is much easier to falsify than a 14-day discharge list and treatment – says Djerlek.

We have all permits and tests recognized in the EU

In private laboratories, they state that the decision of the Government of Serbia to recognize only tests of state laboratories for covid passes is damaged for citizens who cannot choose for their money.

Mirjana Sarkić, owner of the BioMedica laboratory, told Euronews Serbia that they were unpleasantly surprised by the announcement that arrived on October 28 that the reports of private laboratories would not be valid for kovid passes.

He notes that their laboratories use tests recognized in the EU, that they have a permit from the Ministry of Health to do antigen tests and antibody tests.

– We send daily reports to the Trampoline Institute of both positive and negative patients. That is our obligation. The problem is that they do not enter that data into the system, and they do not make it possible for us to enter it so that it can be seen in the green certificate – says Sarkić.

Every day, they receive complaints from citizens that they cannot get a covid pass with the reports of a private laboratory. All of them, he says, are instructed to complain to the Ministry of Health and the Trampoline Institute.

– This is harassment and injustice towards citizens. They pay for testing, and they are not allowed to choose whose service they want to use. With our reports, they can travel anywhere in the world, but they are not valid in Serbia even after 8 pm – she stated.

Let us remind you, kovid passes were introduced on October 23 and at the beginning they were obligatory for entering catering facilities after 10 pm. From Monday, November 8, they are mandatory after 8 pm, not only in catering facilities, but also in casinos and bookmakers.