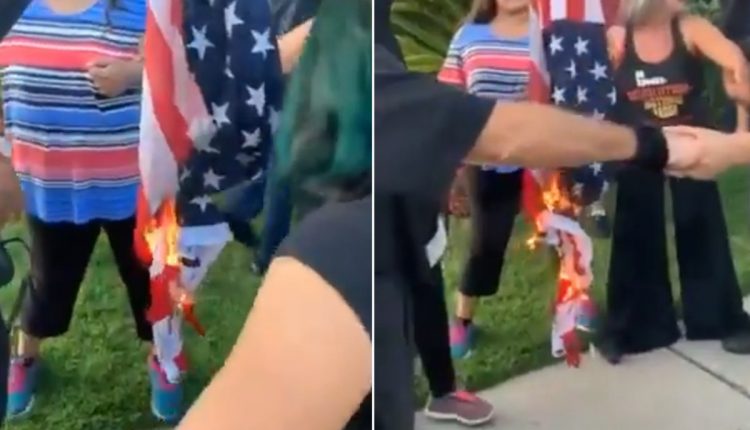 A self-described communist group burned an American flag outside a Los Angeles hotel on Tuesday to protest President Trump’s arrival in the city and sparked a series of fights with pro-Trump counter-protesters.

“America was never great!” sang a contingent from Revolution Club Los Angeles as they locked their hands in a circle outside the Beverly Hills Hotel, a video of the action tweeted by the group.

This chorus addressed “humanity first!” when a hunter set Old Glory ablaze in the middle of the circle.

Towards the end of the clip, a counter-protester is seen trying to penetrate the circle, while those who make up its perimeter prop their arms against the penetration.

This clash was one of several that erupted during the tense conflict, according to CBS subsidiary KCAL 9.

“I’ve never seen this in all my years,” Gregg Donovan, a Trump supporter, told the broadcaster. “I was very disappointed on both sides. I took a neutral stance. I just stood there with my shield the whole time, but the burning of the flag really hurt. “

Trump was participating in a nearby fundraiser run by real estate developer and Republican donor Geoffrey Palmer when police outside broke up the skirmish.

KCAL reported that while several people were arrested, no one was arrested, a fact that has been denied by the Revolution Club Los Angeles.

“This is us who burned this rag because the Trump / Pence are fascists and the Democrats are war criminals and we need REVOLUTION!” tweeted the group, describing itself as “led by the new communism forged by Bob Avakian,” leader of the Revolutionary Communist Party, United States.

“And that’s a member of the Rev Club who was illegally arrested!” continued the tweet, tweeted a Fox reporter’s video of a protester being handcuffed to the ground.

The group later tweeted that the protester had been released.