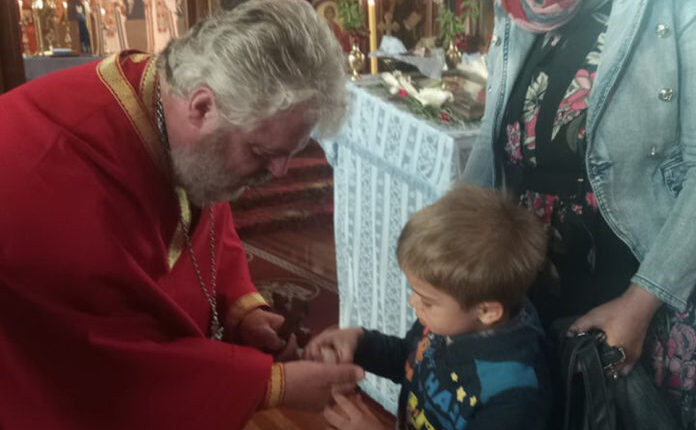 The youngest believer who took communion on Đurđić

On Tuesday, November 16, the Serbian Orthodox Church and its believers across Australia prayerfully marked Djurdjic, the memory of the transfer of the relics of St. George from Nicomedia to the city of Lida and the renovation of the temple where his body was laid.

Although it was a working day, many believers filled the shrines on the Fifth Continent and solemnly marked this holiday. On this occasion, a significant number of believers, including young people and children, gathered in the Cathedral in Kabramati, which bears the name of this saint.

The holy liturgy was served and the believers were given communion by the head of the church, archpriest-staurophore Đuro Đurđević, who cut about twenty cakes for the celebrants before and after the liturgy. In his sermon, he congratulated the believers present on the holiday, and then explained that St. George or St. George was a great martyr and a fighter for Christianity, which is celebrated by many Serbs as a baptismal feast.

This saint is celebrated twice a year in our nation, as Đurđić on November 16 and Đurđevdan on May 6, when the day of his death is celebrated and then on icons St. George is most often represented on a horse, killing a dragon, while on icons for a holiday Đurđić shows without a horse, in a standing position, with a spear or sword in his hand.

– In the church calendar, St. George’s Day is marked with a red letter, and although Djurdjic is not, it is considered to be of great importance for the Orthodox Church – Father Djuro explained.

After the religious work, the worshipers and believers went to their homes, or as it happens, to relatives or friends for a celebratory lunch or dinner.

Let us remind Kabramat parishioners and believers that due to the restrictions that are in force due to the corona virus, Sunday services or holidays, the Holy Liturgy is served from 9 am, and after December 5 it returns to normal time, ie from 10 am.