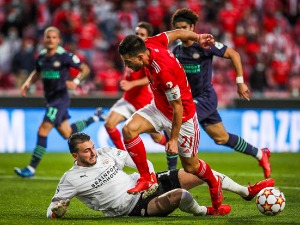 Benfica took the lead in Lisbon through Rafa Silva in the tenth minute, and Weigl raised in the 42nd.

Gakpo scored a goal for PSV in the 52nd minute, thus saving the team from Eindhoven.

It was extremely exciting in Switzerland, where the Young Boys team defeated Ferencvaros 3: 2.

The guests took the lead with a goal by Bolija in the 14th minute, and two minutes later Elija equalized.

Hefti received a red card in the 25th minute, and the guests had a great opportunity to equalize from the penalty spot.

Uzuni did not use the penalty, and then VAR annulled Martins Pereira’s goal due to a foul.

Sierro scored for 3: 1 in the 40th minute, and the final result was set by Boli in the 82nd minute of the game.

In the last match today, the Malmö team defeated Ludogorets with 2: 0.

The primary case of kovida after six months