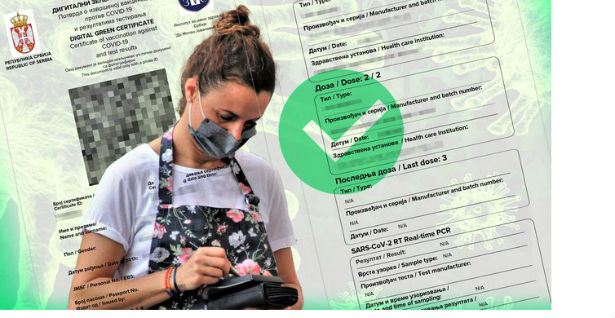 All about kovid certificates in keeping with EU guidelines!

GREAT DILEMMA SOLVED: All about kovid certificates according to EU rules!

From Friday morning, the citizens of Serbia will be able to download digital green certificates that are compatible with the rules of the European Union on the e-Government portal.

The director of the Office for e-Government, Mihailo Jovanović, said that all vaccines given in Serbia will be included in the new certificate. He pointed out that the introduction of covid passes significantly increased the number of first vaccines, by about 70 percent, and that 56.7 percent of adult citizens of Serbia are currently vaccinated.

The director of the Office for e-Government, Mihailo Jovanović, said that yesterday’s decision of the European Commission on the recognition of kovid certificates from Serbia came into force and that it takes 48 hours to adjust the technical systems of the European Union.

Which practically means that from Friday morning I expect a new electronic service on the Electronic Administration portal, which will include the issuance of digital green certificates that will be EU compatible – said Jovanović.

He stated that the new certificates are different from those that have been issued so far.

He emphasized that all vaccines given in Serbia will be included in the certificate.

“The European Medicines Agency has its recommendations, EU member states make decisions in different ways and it depends on the country which country recognizes which vaccine. In any case, all data on all vaccines received in Serbia will be in that EU certificate.” , explained Jovanović.

He stated that the citizens of Serbia with the new certificate will be able to enter all closed spaces in EU countries for which a certificate is required, but also in 22 countries outside the EU that have joined the system.

“Citizens can still use domestic certificates”

Jovanovic explained that citizens can still use domestic certificates, and that the new certificate will be needed by those who travel to the member states of the European Union, and he also announced that two new mobile applications will be introduced.

“One, specific for reading European certificates. Each of us will be able to read them, but this application will be used by inspectors and the Border Police Administration when someone from the EU wants to come to our country, because we have full compatibility of all systems. Also, there will be and another application where our citizens will be able to read and store their European green certificates in that application, as a kind of e-wallet, “Jovanović emphasized.

He added that from next week, the new certificates will be available for issuance in post offices across the country.

“About 56.7 percent of adult citizens vaccinated in Serbia”

Speaking about vaccination, Mihailo Jovanović said that the introduction of covid passes significantly increased the number of first vaccines, by about 70 percent.

“Currently, about 56.7 percent of adult citizens of Serbia have been vaccinated in Serbia. What is interesting is that most of them are in the age group of 31 to 45, which shows that finally younger citizens have started to be vaccinated, which is a good way to acquiring collective immunity, “Jovanovic said.

He pointed out that there is a shift in vaccination in some local governments.

“We have cities and municipalities such as Presevo, where 76 percent, Priboj 67, Mali Zvornik 64, Kladovo 63 and Belgrade 61 percent of adult citizens have already been vaccinated. Unfortunately, we also have those who are below 33 percent, namely Tutin, Lajkovac, Mionica, Novi Pazar, Ub and Ljig “, said Mihailo Jovanović.

Croatian double determined to play for Serbia, Djokovic is likely one of the causes!

Your models have completed quite a few duties this 12 months and achieved notable outcomes!