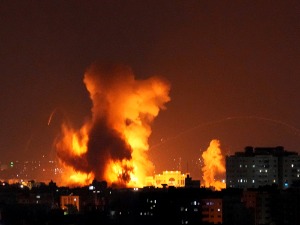 The Israeli Defense Forces (IDF) announced that they are continuing to attack Palestinian Islamic Jihad sites across the Gaza Strip.

The city authorities of Tel Aviv announced that they are opening public shelters, following the instructions of the foreign command.

The Times of Israel states that the rockets launched from Gaza so far have not reached Tel Aviv.

Lapid: The battle will last as long as it takes

In his first public appearance since signing off on Operation Dawn in Gaza earlier today, Israeli Prime Minister Yair Lapid said the battle “will last as long as it needs to” and that the government has a “zero tolerance” policy for any attempted attacks from Gaza on Israel.

Islamic Jihad: More than 100 rockets fired at Tel Aviv and the surrounding area

Islamic Jihad announced that more than 100 rockets were fired at Tel Aviv and its surroundings in retaliation. Their spokesman said it was “just the beginning of the response” to the killing of the group’s commanders.

Air raid sirens sounded in the central part of Israel, reports the Times of Israel.

Egypt as a mediator in the crisis

Egyptian state television reported that Cairo would mediate between Israel and Palestine to prevent further escalation of the conflict.

The Israeli Defense Forces claim that in operation “Dawn” the targets of the Palestinian Islamic Jihad movement were targeted, in which the senior commander of that organization was liquidated.

Health officials in Palestine said at least ten people, including a five-year-old child, were killed and 44 others were wounded in the attacks.

A spokesman for the Israeli army said that it is estimated that around 15 “terrorists” were killed, adding that he did not have precise data on the casualties.

Israel’s Military Radio issued a call to military reservists living near Gaza, which has been ruled by Hamas since 2007.

A Palestinian Islamic Jihad official confirmed that Tayzir al-Jabari, described by the Israeli military as the main coordinator of Islamic Jihad and Hamas, was killed in an airstrike, when bombs hit several targets in the densely populated area.

In the footage, smoke can be seen rising from the building where the murdered Jabari was apparently located.

Islamic Jihad announced that more than 100 rockets were fired at Tel Aviv and its surroundings in retaliation. Their spokesman said it was “just the beginning of the response” to the killing of the group’s commanders.

Egypt as a mediator in the crisis

The strikes came after Israel arrested Bassam al-Saadi, one of the leaders of the Palestinian Islamic Jihad group, during a raid in the occupied West Bank city of Jenin earlier this week.

Israeli Prime Minister Yair Lapid said that the goal of this operation is “to remove a concrete threat to the citizens of Israel and civilians living near the Gaza Strip.”