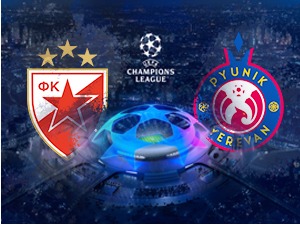 Dejan Stanković’s team had a great start to the domestic league, where they achieved four consecutive convincing victories.

On the other side Pjunik, a club founded in 1992, in the previous 30 years of its existence, won as many as 31 trophies in Armenia and is the most successful club in its country. Pyunik has 15 titles of the champion of Armenia, eight national cups, as well as nine trophies in the Super Cup. However, last season they won the championship title after full six seasons during which the champions were Alashkert and Ararat.

If Pjunik is kicked out, Zvezda will win the match between Maccabi Haifa and Apollon.

As for the play-off qualifying matches, they will be played on August 16 or 17 in Israel or Cyprus, with the second leg scheduled for August 23 or 24.

Crvena zvezda also found out about their potential rivals in the draw for the Europa League, if they are eliminated from Pjunik, and that will be the defeated team from the duel Sherif or Viktoria Plzeň.

The match between Crvena zvezda and Pjunik at the “Rajko Mitić” stadium starts at 8:45 p.m., and you can follow its progress and results on our portal.

‘An Arm and a Leg’: Her Invoice for a Prenatal Check Felt Like a ‘Bait-and-Change’ Scheme