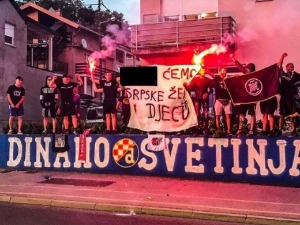 Zagreb, followers convicted for a banner inciting violence towards Serbian girls and kids

Everyone admitted guilt and said they repented for publicly inciting hatred and violence.

In addition, the defendants pointed out in their defense that they volunteered after the earthquake in Zagreb and in the Sisak area, which the court accepted as a mitigating circumstance.

All defendants must pay court costs in the amount of 500 kunas (66 euros).

The court especially took into account the fact that the defendants, as volunteers, helped the victims in the earthquake-stricken area of ​​Banija, including members of Serbian nationality, which indicates that the act is a reckless excess, and not a pattern of their behavior, the court said.

The indictment, filed in late July 2020 before the Zagreb Municipal Criminal Court, charged the 21-year-old, three 20-year-olds and two 22-year-olds with “gathering with several unknown persons” at around 9 pm on June 11, after the first suspect The 21-year-old made a banner, which, according to its content and appearance, incites violence and hatred towards members of the national minority, “the state prosecutor’s office said after the indictment was filed.

The prosecution added that the six defendants, along with other unknown persons, were “motivated by intolerance towards members of a national minority and with the intention of provoking violent forms of behavior, intolerance and contempt towards persons of other nationalities, with lit torches.” -year-old “.

In addition, they loudly shouted words calling for violence and hatred, the prosecution claimed.

According to the photos published on social networks, it is about several Dinamo club fans who are in Zagreb displayed a banner which read “We will fuck Serbian women and children”, with the Ustasha letter “U”.

The photo was published on social networks by the Serbian National Council, while Prime Minister Andrej Plenković condemned the act on the same day, Hina reminds.

That’s no matter you do and you aren’t afraid