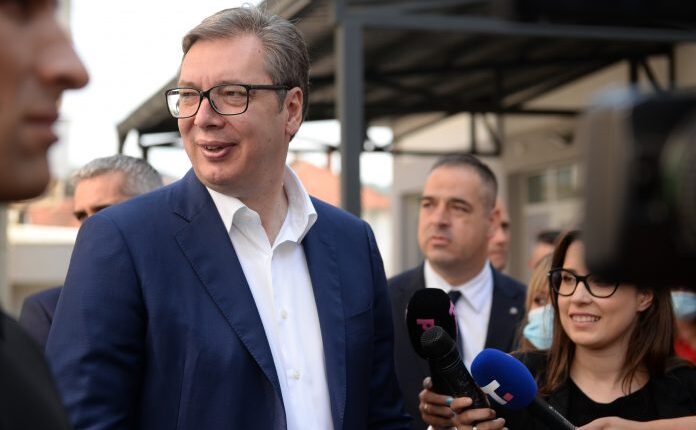 Vucic solutions Erdogan: We are going to defend ourselves (VIDEO)

The President of Serbia, Aleksandar Vučić, announced today that Serbia will oppose if there is a new lobbying for the recognition of the self-proclaimed independence of Kosovo.

When asked about the announcement of the President of Turkey, Recep Tayyip Erdogan, that he would intensify lobbying for the independence of the so-called Kosovo, said that it is realistic, because Turkey is a superpower, and Erdogan is a great leader.

– I’ll try to talk to him. Until September 1, according to the Washington Agreement, both sides have the obligation not to lobby for recognition or recognition. If they start the recognition action from September 1, or maybe before that, we will oppose it – he emphasized.

Vučić pointed out that Turkey is a great power, that it is small and negligible compared to Erdogan, but he underlined that Serbia is not so small that it would not try to oppose.

– Serbia protects its own. This is not Turkish, it belongs to Serbia. The only thing left for us is to fight for our country and our people. He is very powerful, and we are not, but I believe that he will soften his position a little – said Vučić.

He pointed out that Serbia has no alternative but to fight for its country.

– You will see that we are not as small as I sometimes say – the President of Serbia said.

About the statement of Bakir Izetbegović

The President of Serbia, Aleksandar Vučić, commented on the statement of Bakir Izetbegović regarding the words of the Minister of the Interior of our country, Aleksandar Vulin.

– I’m not someone who will shut anyone’s mouth. Bakir (Izetbegović) can do that. Vulin is my friend, I don’t agree with him on some things. It was his party rally to which I was invited. He had a speech and it is not mine to silence him – said Vučić during his visit to Despotovac.

– Serbia has its borders and they are recognized in the UN and they are of only interest to us, including Kosovo and Metohija as part of Serbia in accordance with Resolution 1244, item. I will not apologize to anyone anymore, never again – he stated.

– They are the ones who are talking about the abolition of RS. Vulin was talking about something he thinks, ask him that… We are only interested in keeping our own – the President of Serbia added.

“I would do the same as Vulin”

The President of Serbia responded to the criticism of certain media and opposition politicians for publishing photos of people killed by the Velja Nevolje clan.

It should be reminded that the latest photos were shown on television a few days ago by the Minister of the Interior, Aleksandar Vulin, and they show the victims of that clan, killed in a monstrous way, but also their killers.

– I would do the same as Vulin, the same – said Aleksandar Vučić.

– Let’s analyze now, what is disputable here – photos of monstrous murders, on which everything is bluffed, must not be published. The police have all the relevant photos – said Aleksandar Vučić.

But, as he adds, criticism of those photos comes from those who, as he says, did the same thing in the past.

– Let me remind you, citizens of Serbia, what happened before. Do you remember the murders of ‘Kuma’ and Spasojevic, which were on all sides and they killed them when they were incompetent, you just had to catch them. Those photos were equally difficult, if not more difficult – said Vučić.

– They did not mind publishing bone by bone from Batajnica, to show what kind of criminals Serbs are, and then they did something else. They showed footage, live killing of people in Srebrenica, shooting in the back of the head – he said and asked why RTS was not asked to be abolished then?

– And when you remind them all of that now, what do we do now? I will ask for more photos, to show what they did, for people to see what they did. All that happened in seven months, from May 2020, when some thought that they were very strong and that they could do whatever they wanted and that they were ready for big political changes – the President of Serbia pointed out.

The unreal Janis introduced the title to Milwaukee!

Although Thousands and thousands Are at Threat for Diabetes, Medicare Struggles to Increase Prevention Program