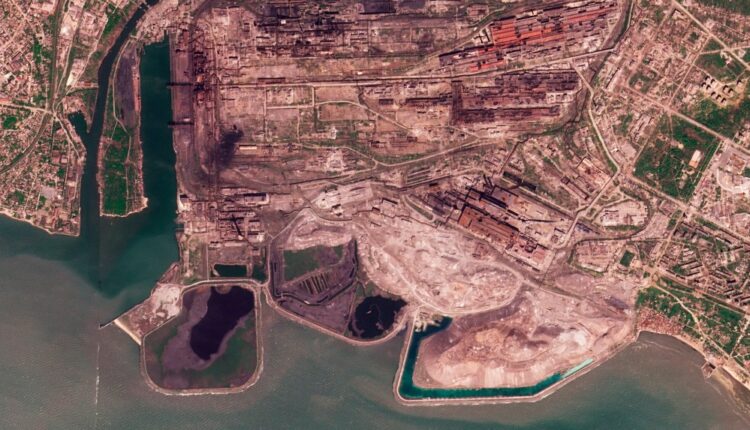 Dozens of Ukrainian fighters killed at the Azovstal steelworks have been returned to Ukraine by the Russian occupiers of the fortress-like plant in the destroyed city of Mariupol, where their last-ditch stand became a symbol of resistance against Moscow’s invasion.

The dead taken from the ruins of the bombed-out mill were transferred to the Ukrainian capital, Kyiv, where DNA testing is underway to identify the remains, according to both a military leader and a spokeswoman for the Azov Regiment.

The Azov Regiment was among the Ukrainian units that defended the steelworks for nearly three months before surrendering in May under relentless Russian attacks from the ground, sea and air.

It was unclear how many bodies might remain at the plant.

Meanwhile, Russian forces continued to fight for control of Sievierodonetsk, an eastern Ukrainian city that is key to Moscow’s goal of completing the capture of the industrial Donbas region.

President Volodymyr Zelenskyy said Ukrainian forces were holding their positions in the city amid fierce fighting in the streets as Russia tries to deploy more forces.

“But it is the 103rd day, and the Ukrainian Donbas stands. It stands firmly,” he said in his nightly address to the nation.

“Russia’s broader plan likely continues to be to cut off the Sievierodonetsk area from both the north and the south,” the UK Ministry of Defense said in an assessment Tuesday.

But it noted that Russian progress to the south has “stalled” over the past week as Moscow’s forces prepare to make a fresh push in the north.

Zelenskyy also said Moscow’s forces intend to take the southeastern city of Zaporizhzhia, home to more than 700,000 people, a move that could severely weaken Ukraine’s standing and allow the Russian military to advance closer to the center of the country.

“In the Zaporizhzhia region … there is the most threatening situation there,” Zelenskyy said.

The Ukrainian fighters’ dogged defense of the steel mill frustrated the Kremlin’s objective of quickly capturing Mariupol and tied down Russian forces in the strategic port city.

The defenders’ fate in Russian hands is shrouded in uncertainty. Zelenskyy said more than 2,500 fighters from the plant are being held prisoner, and Ukraine is working to win their release.

The recovery of remains from the Azovstal ruins has not been announced by the Ukrainian government, and Russian officials have not commented. But relatives of soldiers killed at the plant discussed the process with The Associated Press.

Ukraine on Saturday announced the first officially confirmed swap of its military dead since the war began. It said the two sides exchanged 320 bodies in all, each getting back 160 sets of remains. The swap took place Thursday on the front line in the Zaporizhzhia region.

Anna Holovko, a spokeswoman for the Azov Regiment, said all 160 of the Ukrainian bodies turned over by the Russians were from the Azovstal ruins. She said that at least 52 of those bodies are thought to be the remains of Azov Regiment soldiers.

Maksym Zhorin, a former Azov Regiment leader now co-commanding a Kyiv-based military unit, confirmed that bodies from the steel plant were among those exchanged.

The brother of an Azov fighter missing and feared dead in the steelworks told the AP that at least two trucks of bodies from Azovstal were transferred to a military hospital in Kyiv for identification.

Viacheslav Drofa said the remains of his elder brother, Dmitry Lisen, did not appear to be among those recovered so far. He added that some of the dead were severely burned.

The mother of a soldier killed in an airstrike on the plant said the Azov Regiment telephoned her and said her son’s body might be among those transferred to Kyiv. The mother did not want her or her son to be identified by name, saying she feared that discussing the recovery process might disrupt it.

She tearfully referred to her son as a hero. “It’s important for me to bury him in our Ukrainian land,” she said.

In other developments Monday, Ukraine’s efforts to fight off Russia’s invasion loomed large over D-Day commemorations in France, where the 78th anniversary of the Normandy invasion was marked.

“The fight in Ukraine is about honoring these veterans of World War II,” Army Gen. Mark Milley, chairman of the US Joint Chiefs of Staff, said at the American Cemetery of Colleville-sur-Mer, overlooking Omaha Beach in Normandy.

He added: “It’s about maintaining the so-called global rules-based international order that was established by the dead who are buried here at this cemetery.”

Meanwhile, the president of Ukraine’s separatist Donetsk People’s Republic said that the pro-Moscow region is putting on trial three British men alleged to have been mercenaries for Ukraine. If convicted on the charges, including trying to seize power, the men could get the death penalty.

Russian President Vladimir Putin signed a decree granting lump-sum payments of 5 million rubles (US$81,000) to families of Russian National Guard members who die in Ukraine. Guard members have taken part in such operations as the seizure of the Chornobyl nuclear power plant. The lump sum is roughly six times the average annual Russian salary.

On the battlefield, Russian warplanes fired long-range missiles to destroy a plant on the edge of the town of Lozova in the northeastern Kharkiv region that was repairing armored vehicles, Russian Defense Ministry spokesman Maj. Gen. Igor Konashenkov said.

Russian aircraft hit 73 areas of concentration of Ukrainian troops and equipment, while Russian artillery struck 431 military targets, Konashenkov said. His claims could not be independently verified.

Ukrainian forces put up resistance in Sievierodonetsk and other areas.

“There are more of them, they are more powerful, but we have every chance to fight on this direction,” Zelenskyy said.