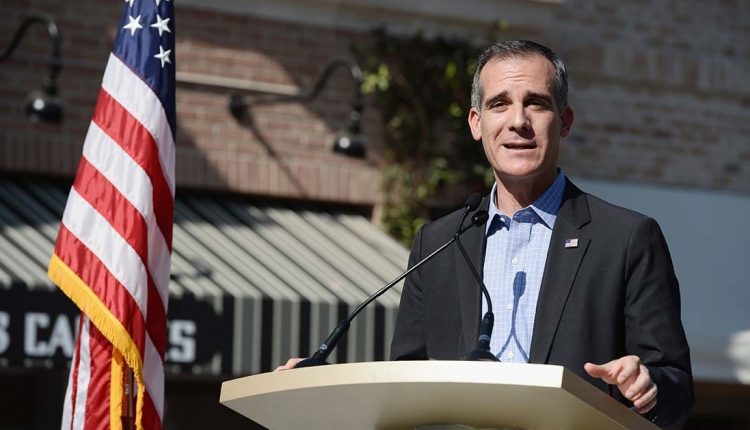 Trump blasts Garcetti on immigration as he returns to LA

SACRAMENTO – President Donald Trump interrupted his return to Los Angeles on Tuesday by berating the city’s Democratic mayor for immigration and maintaining an ongoing feud with California’s metropolitan leaders.

Days earlier, Los Angeles Mayor Eric Garcetti posted a video informing undocumented residents of their legal rights. Trump said back in a Tuesday tweet, “The mayor’s efforts to protect illegal aliens are putting the lives of the public and law enforcement agencies at risk who must be on hand to arrest those released.

“He shouldn’t ask the illegals to beat the system, he should ask them to report safely!” Trump wrote.

Trump threw an elbow to Garcetti as the president prepared to meet with officials Tuesday about applying for the Los Angeles Olympics before heading to a fundraiser in Beverly Hills. He is due to speak with farmers and minority leader Kevin McCarthy in Bakersfield on Wednesday on agriculture issues.

Trump has regularly railed against California’s immigration policy. This issue was taken up again in his State of the Union Address by blowing up the sanctuary guidelines that separate local law enforcement from federal immigration – a separation required by law in Los Angeles and across California – and attacking California, because it has offered health care to undocumented immigrants.

The President has repeated this criticism in the days since, and Justice Department officials have stepped up it. Attorney General William Barr and the US attorney for San Diego both warned after Trump’s speech that the guidelines for protected areas would undermine public safety.

The government has challenged California’s protection laws and threatened to withhold federal funds – reprisals that have so far been blocked in court. Federal officials said last week that they would deploy tactical border guards in sheltered cities in California and elsewhere, which has been criticized by Los Angeles officials.

The California homeless crisis has also been regularly criticized by Trump. The president has beaten Garcetti and other elected officials for failing to cope with rising homelessness on the street, despite administrative officials working with colleagues from Los Angeles. Housing and Urban Development Secretary Ben Carson expanded an olive branch during a visit to Los Angeles last week, saying the federal government wants to work with California and that the two are “not enemies.”

This article is tagged under: