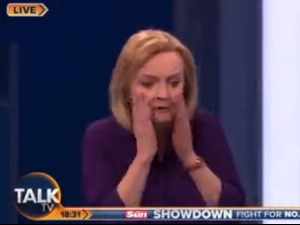 The Tras-Sunak TV debate was interrupted, the presenter fainted

Foreign Secretary Liz Truss, who is the bookies’ favorite to win the Conservative Party leadership election, and former finance minister Rishi Sunak had been debating their policy plans for about 30 minutes when a loud crash rang out in the studio.

While the camera was on Truss, presenter Kate McCann fainted, then the Foreign Secretary put her hands to her face and exclaimed “oh my God”, after which the broadcast was interrupted with a message from the studio that the presenter had fainted.

“Although Kate is fine, medical advice is of the opinion that we should not continue the debate. We apologize to our viewers and listeners,” Talk TV announced on its Twitter account.

Tras and Sunak later sent personal messages to the presenter and wished her a speedy recovery.

“I’m relieved to hear that Kate McCann is doing better. I’m really sorry that such a good debate had to end,” said Liz Truss.

Before the end of the debate, Liz Truss and Rishi Sunak clashed again over their tax policies, spending plans and what they intend to do to end the crisis caused by the rising cost of living, and their contest for the position of prime minister is becoming increasingly hostile.